The Ukrainians Who Won’t Leave Their Animals Behind 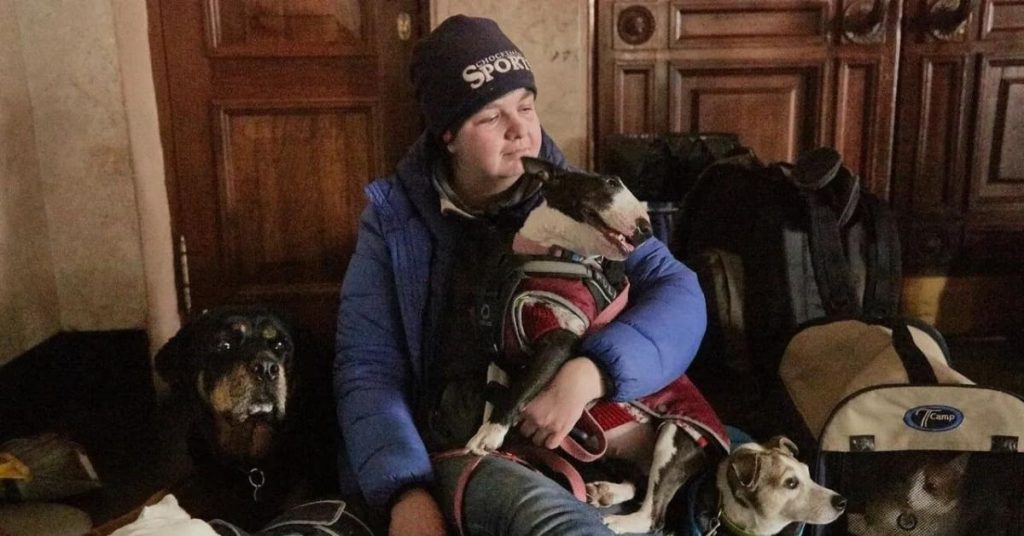 The invasion of Ukraine by Russian forces that began on February 24th has spurred a humanitarian crisis. Along with this tragic story in constant development are also tales of heroism, of people uniting both within Ukraine and across the globe in support of those fleeing the violence.

But there is one underlying story that is not as well-known to the general public: despite these grueling circumstances, many Ukrainians are refusing to leave their pets behind as they flee their homes.

Cats, dogs and other animals are also being rescued from shelters and the streets as Ukrainian cities come under attack from Russian forces ordered by President Vladimir Putin. But many difficulties remain as humans and non-human animals need to escape the country as soon as possible, and not everyone has been able to leave.

Pictures of Ukrainians with their pets, either on leashes or in transport boxes, seeking refuge in bomb shelters or subway stations, have spread like wildfire on social media. Sadly, many companion animals in Ukraine are in dire need of food, medication and adequate veterinary care. Moving throughout Ukraine is now extremely dangerous, but reaching the border to a safer country has become paramount for those seeking refuge. Fortunately, PETA reports that most countries bordering Ukraine are accepting companion animals, with the only exceptions being Belarus and Moldova, for now.

Romania, Poland and Hungary are reportedly accepting pets without the need for documentation, where volunteers and vets have been reportedly waiting at the border of these countries. Under any normal circumstances, these animals would need vaccines, rabies tests and microchips to enter another country. The European Commission had strongly advised EU member states to relax the regulations with regard to pet requirements so that refugees would have “one less thing to worry about.”

Ukrainians aren’t the only ones working hard to rescue animals from the worst European crisis since the second world war. The Daily Mail recently published a story about a Polish charity worker, Konrad Kuzminski, who has joined a number of other staff members from a Polish animal shelter near the Ukrainian border, coming to the aid of over 100 cats, dogs, rabbits, hamsters, and a chameleon.

The shelter has been working overtime since shortly after the Russian invasion of Ukraine, with a team reportedly crossing the border on a daily basis to help the animals.

The crisis has also affected immigrants and foreign students in the country. Rishabh Kaushik, an Indian student in Ukraine, asked PETA India to appeal to the Indian government to allow him to bring his rescued dog back to India with him. Mumbai-based animal activists have praised Kaushik for refusing to abandon his dog in the now war-torn nation. The Union ministry of fisheries, animal husbandry and dairying of India is now allowing Indians in Ukraine to bring their pet dogs and cats back home.

How You Can Help Ukrainians and Their Pets

People in other countries have also been offering to help by sending pet food and other supplies, and there is even a Facebook group for Ukrainians asking for help transporting their pets in Ukraine, where Roksana Angel wrote: “Attention!!!! I lost a DOG !!! ATTENTION LOST DOG!!!!!! edit thank you all !!! He has been found, they are already waiting for him at home.”

UAnimals is currently receiving donations to support animal shelters where food and supplies are running out as a result of the violence. The organization is sending assistance to numerous Ukrainian animal shelters, such as Sirius, Give a Paw, Chance for Life, and Pif. A Facebook post reads the following:

“We continue to help the shelters.

Today, together with the volunteers, we distribute food around small shelters of Kiev and help save lives. We continue to provide financial assistance to refugees in military cities.

Thank you for your help!

To help UAnimals, make a donation here. To stay updated on the general situation regarding the rescue and transport of companion animals in and around Ukraine, visit PETA’s website here. To help overall humanitarian efforts in Ukraine, click here.

A Growing Humanitarian Crisis for People and Animals in Ukraine

At the time of writing, well over a million people have fled Ukraine in just one week. That number has the potential to climb to four million, while six million more are projected to be displaced within the country, according to the United Nations High Commissioner for Refugees. The majority of them, approximately 650,000, have fled to Poland and 384,000 have fled to Belarus, followed by Hungary, Moldova, Slovakia and Romania.

Meanwhile, over 360 civilians have been confirmed killed and 759 wounded since Russian troops initiated their invasion of Ukraine on February 24th, according to a report from the United Nations, published in Reuters.

vKind is the U.S.’s largest fully-vegan search platform and listing app. Use our search tool and find any vegan product, service, or experience, as well as organizations around the world who are fighting for the animals.