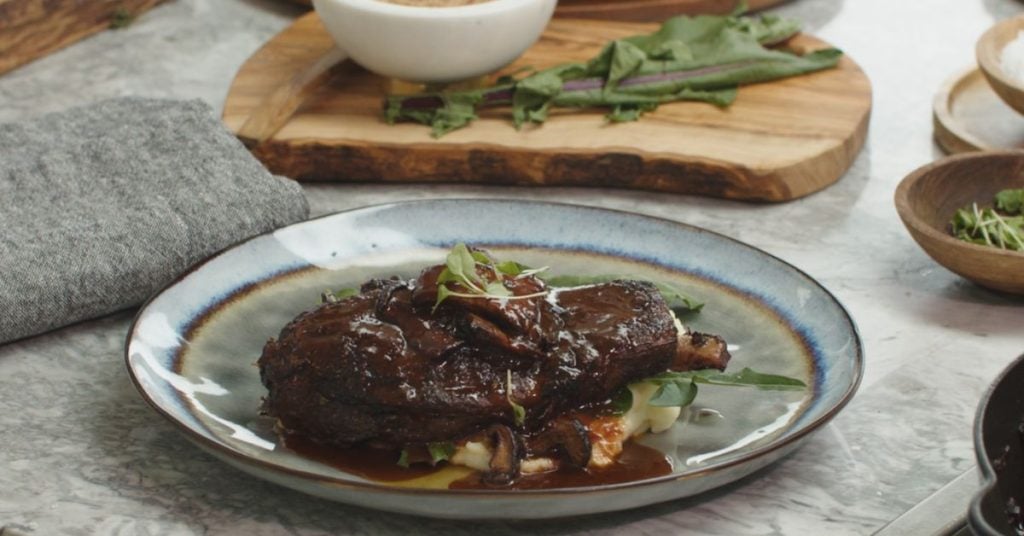 A vegan steak supper dish was recently posted on celebrity chef Gordon Ramsay’s YouTube channel. Ramsay was formerly a vocal opponent of veganism. Ramsay teases being vegan and demonstrates to viewers new methods to prepare vegetables in this meal, which is part of a growing collection of vegan dishes.

Ramsay instructs viewers on how to toast spices, roast an eggplant over an open gas stove flame, and season the peeled eggplant in the quick one-minute video. He then adds butter to a skillet with red wine to reduce it, making sure to specify that it is “vegan butter,” and bastes the eggplant while it cooks. Finally, Ramsay demonstrates to the audience how to plate the dish, beginning with mashed potatoes and greens, a slice of the vegan steak, and a red wine sauce and mushroom garnish.

Ramsay used to make regular jokes about vegans and once claimed he was allergic to them in earlier years. However, the celebrity chef now appears to be embracing veganism, as seen by the appearance of more vegan items on his restaurant menus and the participation of vegan cooks on his cooking competition series.

Ian Theasby and Henry Firth, the team behind the viral vegan success BOSH, recently appeared on Ramsay’s newest competition program, Future Food Stars, which is now airing its inaugural season on BBC One in the United Kingdom. The program gives 12 aspiring business owners in the food and beverage sector the chance to compete for Ramsay’s personal investment of £150,000 ($185,000) and mentorship. The surviving businesses were required to produce a 30-second TikTok video supporting Ramsay’s self-described “favorite subject,” veganism, in a semi-finale episode of the competition that aired last month. Theasby and Firth served as the challenge’s judges.

Josie Clemens became the first vegan participant in the 17-year history of the food competition show Hell’s Kitchen when Ramsay welcomed her to season 20 last spring. The chef, who was born in Michigan, stated that she and Ramsay initially connected on social media after she asked him on Twitter, “When are you going vegan, mate?” Ramsay responded by following Clemens.

The Michelin-starred chef has developed several vegan meals at his more than 35 establishments. At his London restaurant, Bread Street Kitchen, Ramsay celebrated Veganuary in 2019 by introducing a vegan menu. The chef made sure vegan burgers had a spot on the menu when he opened his first restaurant in Chicago last year. The Vegan Burger is one of eight distinctive burger variations featured at the Gordon Ramsay Burger restaurant, which bears his name. A vegan patties, bib lettuce, tomato, avocado, egg-free garlic mayonnaise, and a vegan bread are used to make the totally plant-based burger. The vegan patty can also be used in lieu of meat in any of the other burgers for an extra $6.

Additionally, Ramsay has been spotted endorsing vegan goods. The chef participated in a commercial for the oat milk from vegan company Silk as an ambassador for a campaign for vegan milk. The Greatest of All Time (G.O.A.T.) campaign marketed Silk’s oat milk as the G.O.A.T. milk and included celebrity ambassadors who are G.O.A.T. The campaign was promoted on social media by Ramsay, who was dubbed the G.O.A.T. of Yelling in Kitchens.

“Well, it took my kids getting on me, but now I really enjoy cooking more plant-based dishes at home and in my restaurants…. Let me tell you, I know greatness when I taste it, and I am loving Silk Oatmilk for both sweet and savory recipes,” Ramsay said.

Ramsay has enthralled online audiences with other vegan delicacies, such crispy vegan bacon and vegan bang bang cauliflower, in addition to the eggplant steak recipe on his YouTube channel.

Ramsay makes a vegan BLT sandwich out of rice paper that has been marinated, baked, and used in the vegan bacon process. Additionally, he concludes the video with his new cutline, “I’m becoming vegan… for lunch,” much like he does in many of his other YouTube videos when he provides a vegan meal.

Source: “DID GORDON RAMSAY JUST MAKE A VEGAN STEAK OUT OF AN EGGPLANT?” by VegNews