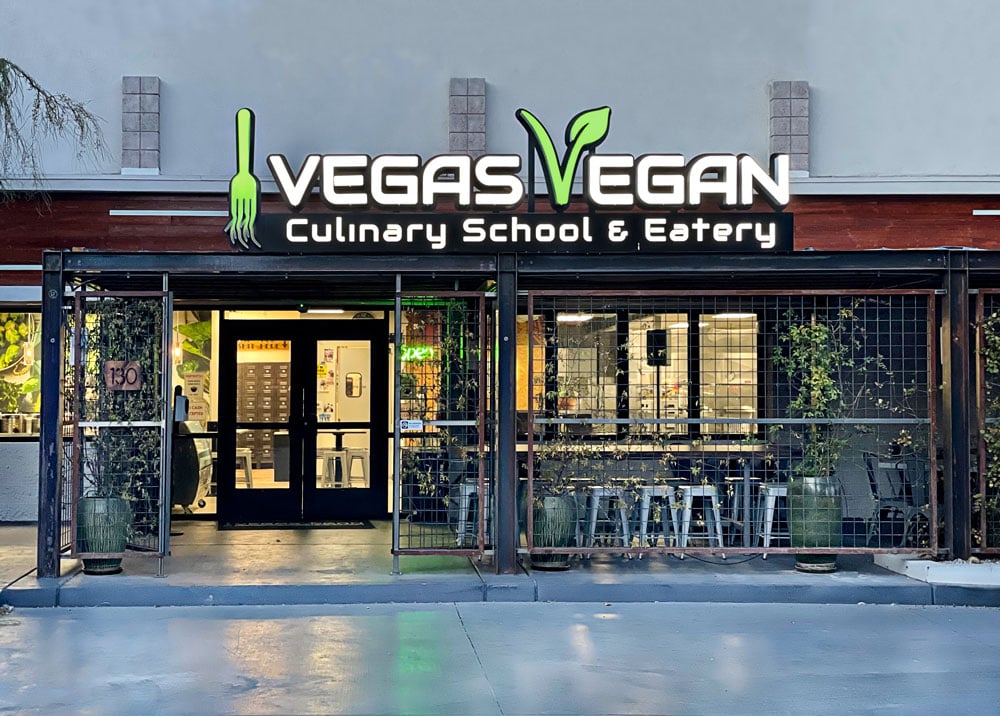 “I love the history behind Vegas and this building,” said Heather Heath, Vegas Vegan Culinary Founder, “On Sundays, we have a hidden brunch menu item that’s a dick-on-a-stick waffle.”

Cheeky secret menu aside, Vegas Vegan Culinary has a not-so-secret mission: advancing veganism by teaching the layperson how to enjoy making plant-based foods.

With the eatery as a magnet, diners discover approachable, a la carte vegan cooking classes as they dine alongside a sparkling-clean space with multiple stoves, workspaces and everything needed to host a top-of-the-line culinary class for aspiring home cooks. 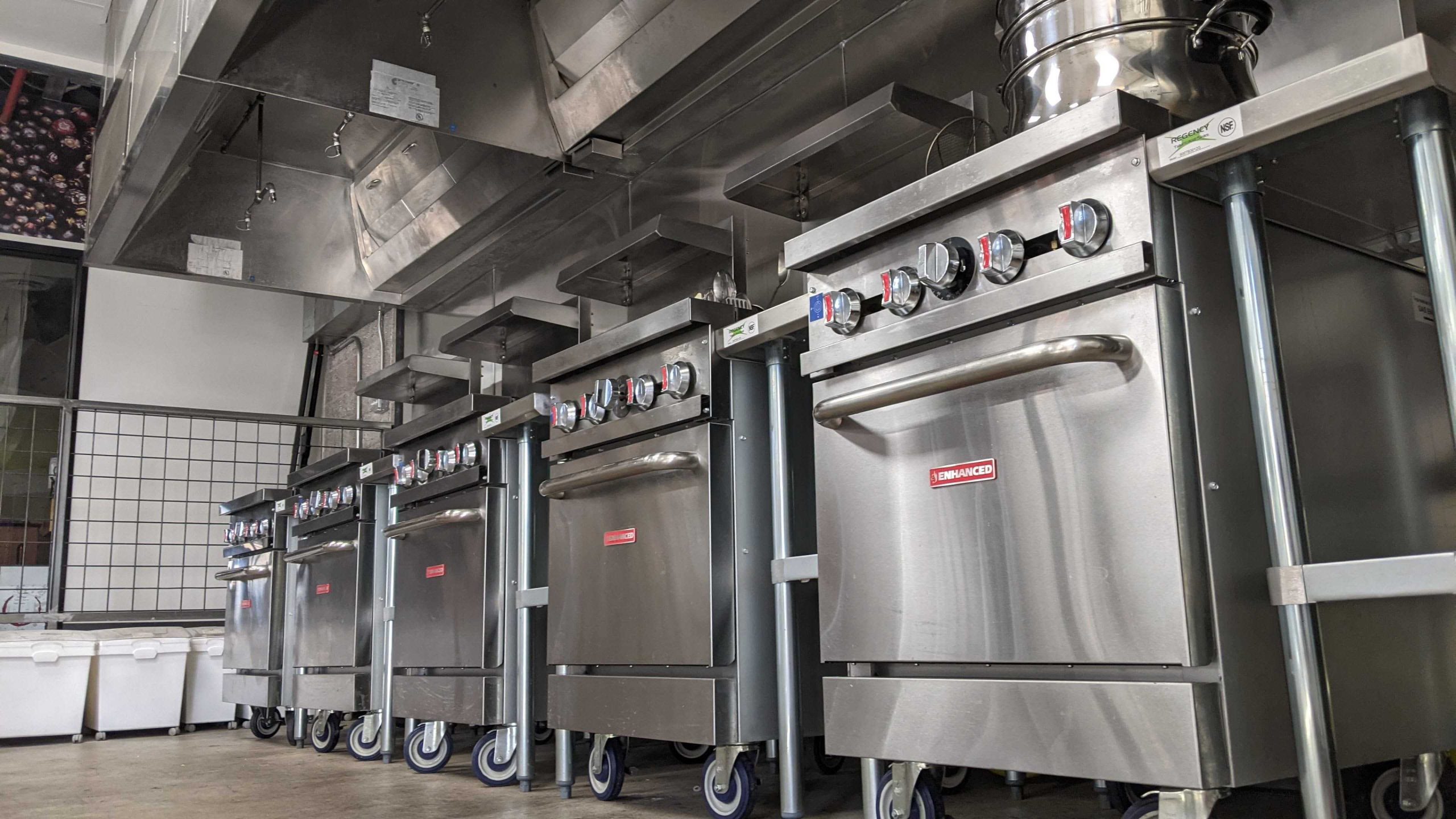 The menu at Vegas Vegan Culinary has proven vegan cooking can be healthy and largely whole food-based while still satisfying our cravings for old favorites. Items like the mouthwatering and flavorful BBQ jackfruit sandwich, eggless egg salad, lobster salad roll and buffalo chickpea crab cakes are a vegan twist on classic items. 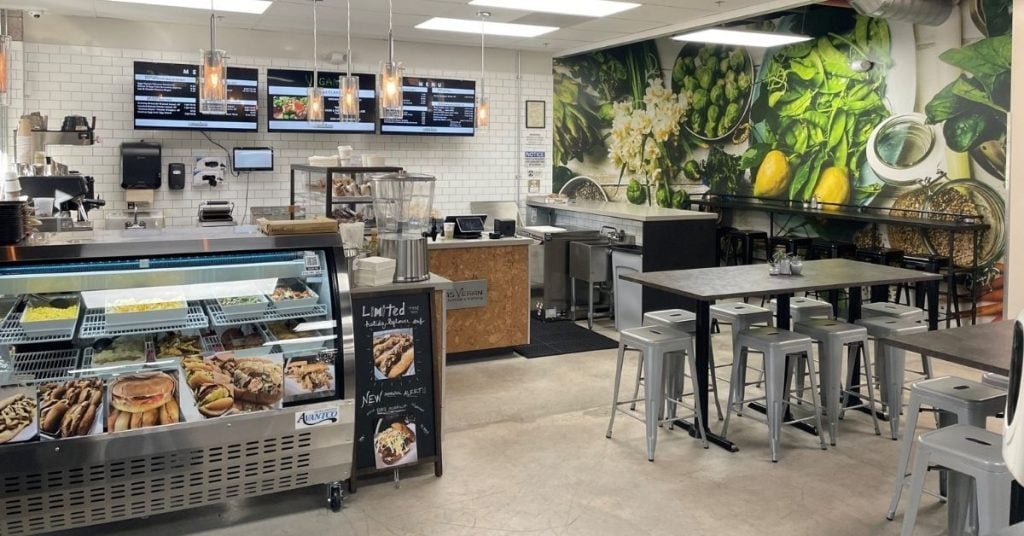 “I have a lot of businessmen come here for lunch feeling skeptical,” Heath said, “They feel the need to tell me they’re not vegan at first, but end up leaving impressed. On their way out, I tell them we’ve got some fun classes they can bring their girlfriends or daughters to—it works out.”

Heath says that half the students in Vegas Vegan Culinary workshops are vegan, and the other half just vegan-curious.

“Some come along with a vegan friend or just to have a good time while learning something new. Once I get my liquor license it will be even more of a fun time,” Heath laughs.

Heath will soon host classes strictly dedicated to vegan cocktail-making, and students will be able to enjoy a cocktail before their class.

“I want to use aquafaba in our cocktails and get fancy,” Heath said playfully.

Although Heath lacks a formal background in culinary arts, her creativity and problem-solving skills allowed her to see Vegas Vegan Culinary’s potential as a profitable and effective way to advance veganism without activism.

“As supportive as vegan groups are, they can also be defensive and attack people,” Heath said,

“I want to be a resource and a safe place for people to explore plant-based options in a fun way, and make it a memorable experience for them.”

For Heath, activism and rescue work can feel like an uphill battle. Using her marketing background and out-of-box thinking, she got serious about what she could do that would reduce the farming of animals. In addition to launching Vegas Vegan Culinary, she pivoted the branding of her nonprofit, Willow’s Wish, an advocacy organization that aims to end the dog meat trade in South Korea.

“I was in Asia 4-5 times per year working on my nonprofit, and eventually had to face the harsh reality that I was just a U.S. citizen trying to change an age-old culture somewhere else,” she said, “You can’t just preach to people.”

Heath realized she had to find a warmer approach that would tap into the mindset of both Koreans and Americans. The way to do that was Willow, the fluffy brown miniature poodle Heath rescued from a Korean dog farm in the early days of her nonprofit.

“People will argue with you about your mission until you’re blue in the face—but they won’t argue with a cute-looking dog rescued from a dog meat farm,” Heath said, “Once I made Willow the voice of our organization, we blew up.”

By virtue of exposing dog farming through Willow’s voice, something clicked in the hearts and minds of the people she was trying to reach. Previously a decades-long vegetarian and animal lover herself, Heath’s own path to veganism also stemmed from her advocacy work.

“When I started reading about the dog meat trade, and how animals are hung and killed to be turned into food, I’d then turn around and look at my dog next to me,” Heath said, “It’s not like I have a cow sitting next to me, but I had leather on my shoes.

“Every aspect of everything around me was just dead animals.”

Heath was not alone, citing numerous examples of people who worked with Willow’s Wish and became vegan along the way. Americans and Koreans began making the connection between the cruelty of dog farming and the cruelty of farming for all animals.

With the pandemic, Heath’s travels to South Korea came to a rapid halt in 2020, and haven’t resumed since.

“The silver lining of the pandemic is that it forced me to focus on Vegas Vegan Culinary,” Heath said, “A nonprofit isn’t meant to be a career path. You need a for-profit that feeds into it, and I’m working on tying mine together.”

Heath hasn’t wasted time, reaching out to up-and-coming plant-based food brands in Korea and offering to promote and cook with their products at Vegas Vegan Culinary in exchange for corporate sponsorship for Willow’s WIsh.

“Unlimeat is an amazing woman-founded company in Korea who has supplied the meat in our gyros—it’s probably one of the best processed vegan meats I’ve ever tried,” Heath said, “Everyone loves it and can’t wait until Unli officially launches in the U.S.”

Industry and vendor support, both from established names in the U.S. like Sophie’s Kitchen and Miyokos and startups like Unli Meat in South Korea, has been one of the most enriching parts of the journey for Heath.

“The support from the community has been unbelievable—people love the concept of what I’m doing,” Heath said, “How many times in life do you say, ‘I should have come up with that first?’ Well, I feel like I finally got my ‘I did it before anyone else’ moment.”