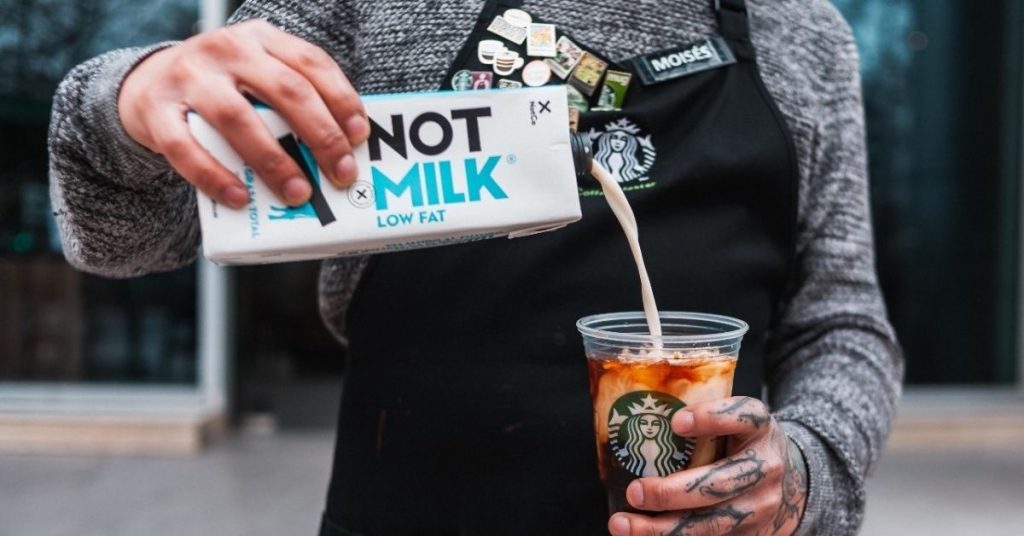 Starbucks Colombia has just released its newest plant-based milk alternative, which is created using artificial intelligence. TheNotCompany (“NotCo”), a Chilean food technology company, has teamed with Starbucks to extend its vegan milk options, which now include soy, almond, coconut, and oat milk. When purchasing lattes, teas, frappuccinos, and other beverages, customers can now choose NotCo’s NotMilk instead of dairy milk.

Given Colombia’s prominence as one of the world’s leading coffee exporters, this launch, according to NotCO CEO and co-founder Matias Muchnick, is historic. In the year 2020, the South American country produced around 14 million 60-kilogram coffee bags, totaling nearly 1.9 billion pounds. Colombia is second in worldwide coffee output, barely behind Brazil, and third in regional coffee consumption.

“When we created NotMilk, the dream was to be in every corner [of the world]… Today, we’re excited to share this new partnership, created for those who love coffee in all of its forms and customizations, with all Colombians. Being at Starbucks serving NotMilk marks a milestone for NotCo and the world on our way to creating a new [future] together, one that is sustainable, indulgent, and just as delicious,” said Muchnick in a Spanish-language statement.

The startup’s unique AI technology analyzes dairy milk on a molecular level to generate NotMilk. The technology then uses a database of over 300,000 edible plant features to develop unique component combinations that mimic the flavor and texture of typical dairy milk. As a consequence, unusual ingredients such as pineapple and cabbage are used to make NotMilk.

Starbucks’s debut of NotMilk Colombia moves the international coffee chain one step closer to its aim of halving greenhouse gas emissions, water use, and waste generation over the next eight years.

After a 2020 audit revealed that dairy accounts for the majority of Starbucks’ carbon impact, then-CEO Kevin Johnson committed to steer the company in a new, more sustainable direction using plant-based alternatives. According to the audit, dairy accounted for 21% of the 15.6 million metric tons of greenhouse gasses released by over 31,000 Starbucks locations across the world in 2018. Johnson told Bloomberg at the time that “alternative milks will be a big part of the solution… The consumer-demand curve is already shifting.”

While Johnson was referring to Starbucks’ North American customers, similar demand is also evident in Colombia, where the dairy-free milk substitute market grew by 4.3 percent from January to October 2018 when compared to the same period the previous year.

NotCo has teamed with other large corporations to bring vegan options to market outside of Colombia. The business formed a joint venture with major consumer goods company Kraft Heinz in February with the purpose of developing plant-based products to help create a more sustainable food system. The Kraft Heinz Not Company will be the name of the joint company, which will combine Kraft Heinz’s substantial industry experience, relationships, and renowned brand portfolio with NotCo’s AI-powered discovery platform. The partnership enables Kraft Heinz and NotCo to produce co-branded goods at a faster speed and on a larger scale.

Its partnership with Kraft Heinz follows a $235 million Series D fundraising round for the food tech business last summer. The capital round, which was led by investment company Tiger Global, includes vegan racing car champion Lewis Hamilton, artist Questlove, and then-Twitter CEO Jack Dorsey. NotCo stated that the fresh funds will be used to expand into new product categories in North America.

NotIceCream, NotBurger, NotMeat, NotMayo, and NotChicken are all available in Chile, Brazil, Argentina, and Colombia, but NotMilk is presently the only product accessible in the United States. NotMilk is available in Sprouts, Whole Foods Market, and Wegmans stores.

Source: “WHY STARBUCKS’ NEWEST VEGAN MILK IS MADE USING ARTIFICIAL INTELLIGENCE” by VegNews