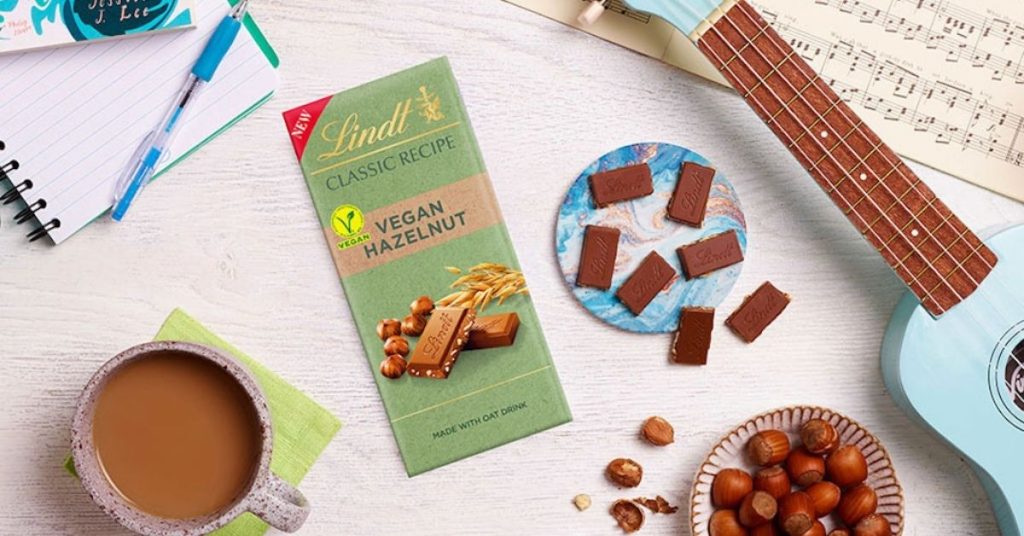 This isn’t the chocolatier’s first foray into the vegan market. Last year, Lindt entered the vegan milk chocolate market with a three-flavor range under their HELLO collection, which was available in Germany and the United Kingdom. Cookie, Salted Caramel, and Hazelnut tastes are among the oat milk-based bars. The new Lindt vegan bars are available in Lindt chocolate shops across Canada, as well as Sainsbury’s and other popular grocery stores in the United Kingdom.

Lindt is one of a growing number of major chocolate manufacturers working on vegan milk chocolate. Though several confectionery firms have previously supplied vegan dark chocolate bars that do not include dairy milk, prominent brands are now creating vegan milk chocolate using a range of plants such as oats, hazelnuts, and rice.

In the UK, Poland, Estonia, Latvia, Lithuania, Australia, and Brazil, Nestlé released a vegan version of their renowned KitKat bar produced with rice milk this year.

“Our challenge when we set out to create a vegan-friendly KitKat was to recreate this iconic product using plant-based alternatives… To achieve this, we worked very hard to get the right balance between the milk alternative and the cocoa. The result is a vegan chocolate that we’re very proud of, and I hope all KitKat fans will love it as much as we do,” stated Louise Barrett, Head of the Nestlé Confectionery Product Technology Center in York.

Cadbury, a British multinational confectionery manufacturer, debuted its first vegan chocolate bar line in the UK this year. The Cadbury Plant Bars are available in two flavors: Smooth Chocolate and Salted Caramel, and are made with almond paste instead of dairy.

Hershey’s has been secretly developing a vegan milk chocolate bar produced with oat milk rather than dairy in the United States. The Oat Made bars are available in two flavors: Classic Dark and Extra Creamy Almond & Sea Salt, and are part of a real-time marketing test Hershey’s is doing through June 2022.