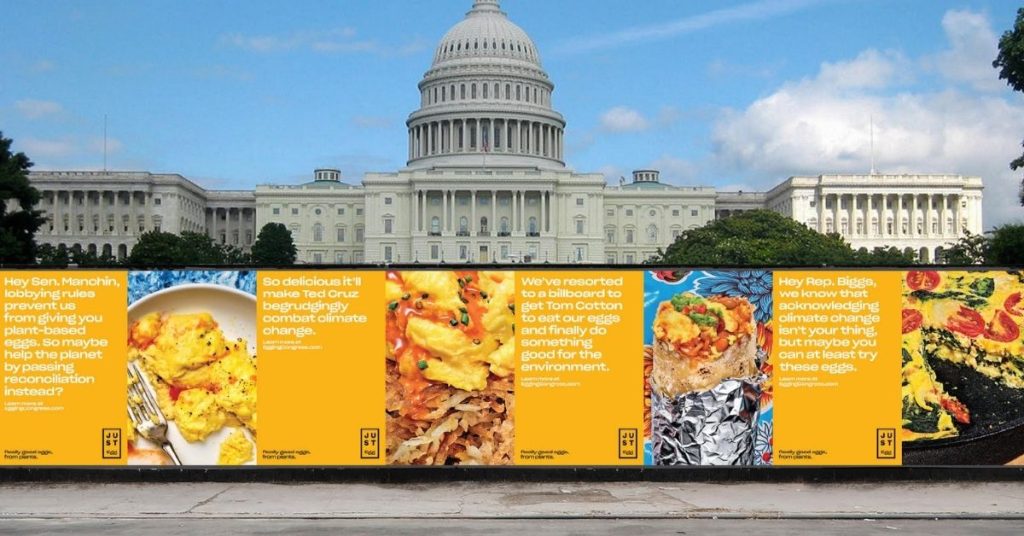 Eat Just, the business behind the vegan egg replacer JUST Egg, has launched a new ad directed at the US Congress’s inaction on climate change. Eat Just is taking over Washington, DC with billboards, flyers, and a food truck during Earth Month (April) to call out climate doubters with its new campaign. The campaign’s pitch includes comments like “So delicious it’ll make Ted Cruz begrudgingly combat climate change” and “These egg sandwiches are more effective against climate change than Congress. Sad.”

A JUST Egg truck will be cruising Washington, DC, dishing away wonderfully named sandwiches, such the Ted Cruz Cancun Vacation, ahead of Earth Day next week. The sandwich includes JUST Egg, vegan pepper jack cheese, chipotle aioli, and fresh spinach, and is a reference to Senator Cruz’s trip to Cancun after his home state of Texas was declared a state of emergency following a brutal winter storm last year. Senator Cruz believes that climate change is not real, despite scientific evidence to the contrary.

“Each of our sandwiches deliciously pokes fun of members of Congress (of both parties) who haven’t taken the threat of climate change seriously enough… And maybe Senator Cruz can finally do something good for the environment by having a delicious plant-based egg sandwich,” said Tom Rossmeissl, Eat Just Head of Global Marketing.

With its new ad, Eat Just is calling out more than just Cruz as a climate skeptic. Rick Scott’s Special Interest Sammy, which comes with JUST Egg, vegan American cheese, and tomato aioli, is named after Florida Senator Rick Scott, who just accepted that climate change is real. Finally, the Inhofe’s Hot and Cold Special—which includes JUST Egg on freedom toast and a snow cone—is named after Oklahoma Senator James Inhofe, who took a snowball into the Senate floor in 2014 in an attempt to deny climate change by demonstrating how cold it was outdoors. Both the Senator and the sandwich have resigned from their positions.

Eat Just is encouraging people to join the effort by visiting EggingCongress.com, which enables them to email letters to their politicians urging them to support greater climate legislation.

Not only is the industrial egg business harsh to birds, but it is also harmful to the environment and a breeding ground for zoonotic illnesses like bird flu. Plant-based alternatives to chicken eggs are becoming more popular. JUST Egg launched in stores in 2019 and has already sold the vegan equivalent of 250 million chicken eggs. Eat Just’s mung bean-based egg substitute has also saved 43.6 million kg of CO2, 9.1 billion gallons of water, and 13,446 acres of land to date. Mung beans are also a drought-resistant crop that may be utilized in regenerative farming.

Despite these significant advances, Eat Just recognizes that just substituting vegan eggs for animal eggs would not save the earth. As a result, the corporation launched this campaign in an attempt to persuade Congress to pass legislation that safeguards the globe from climate disaster.

“We’re proud of our impact, and we hope to raise awareness about the link between plant-based eating and sustainability… But we also know we need more than plant-based eggs to save the planet. And that’s the point of this campaign,” Rossmeissl stated.

Eat Just’s campaign coincides with the release of the latest report from the Intergovernmental Panel on Climate Change (IPCC), which warns that mankind is running out of time to prevent the worst effects of climate change. According to the assessment, methane emissions, which are mostly caused by animal husbandry, must be reduced by one-third by 2030 in order to save the world. The study also calls on governments all around the world to concentrate their efforts on moving consumer behaviors away from animal agriculture.

Last year, US President Joe Biden addressed methane reduction at the United Nations Climate Change Conference (COP26), when he pledged to reduce methane emissions by 30 percent by 2030. Biden’s vow, on the other hand, came with minimal discussion of the role of animal agriculture in methane emissions, instead focusing on repairing leaking pipes. While the United States drags its feet, other countries, such as the Netherlands, are taking steps to combat the destructive meat and dairy industries head on. The Netherlands is considering raising meat taxes in the hopes of reducing meat consumption and shifting Dutch diets more toward a plant-based diet.

Eat Just believes that its campaign will persuade Congress to enact vital climate-saving legislation in a variety of areas, including food, forestry, energy, transportation, and manufacturing. Eat Just, for one, promises to reduce its environmental impact by removing plastic bottles within a year, in addition to manufacturing considerably more ecologically friendly eggs from plants.

“The message of our campaign isn’t ‘we’re awesome’; it’s to point out the absurdity that, in this urgent moment, a plant-based egg company has done more to help our planet than Congress… We’re calling out climate deniers. We’re pushing Congress to prioritize bold climate legislation. And we’re doing what we do best: serving some really good eggs,” Rossmeissl said.

Source: “TED CRUZ GETS TROLLED BY VEGAN EGGS OVER HIS CLIMATE CHANGE DENIAL” by VegNews