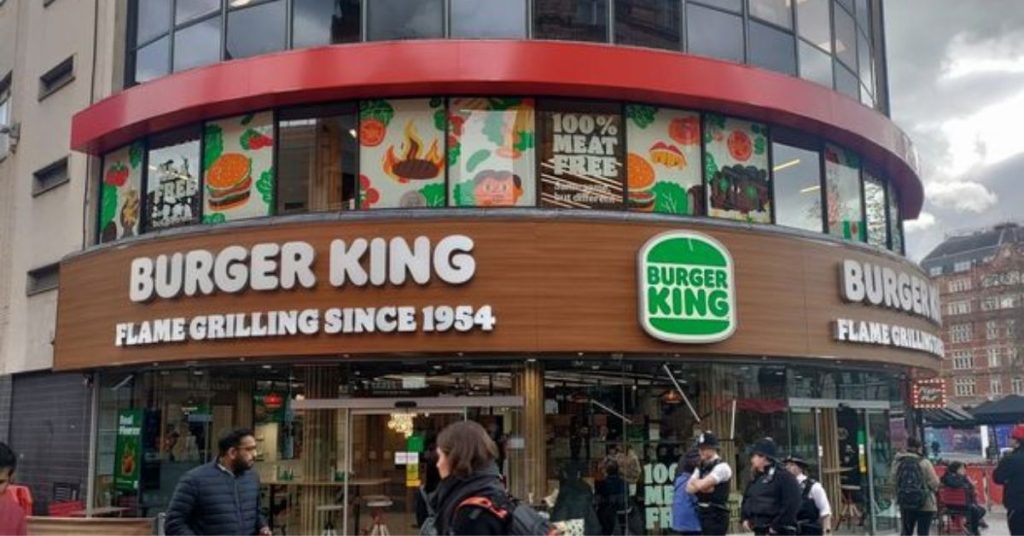 Burger King tested a vegan location in London, UK, which might serve as a model for the fast-food sector as it transitions to plant-based menus. Burger King’s Leicester Square branch made its menu 100 percent vegan last month, including vegan bacon double cheeseburgers, chili cheese nibbles, and the renowned Plant-Based Whopper among the 25 plant-based options. The one-month experiment was intended to tell the corporation about if there is a demand for meat-free restaurants on a permanent basis.

Burger King isn’t the only large fast-food company to offer vegan versions of its most popular products and more, but it is the first to test all-vegan outlets. Restaurants ranging from McDonald’s to Subway are responding to rising demand for meat-free choices by developing new menu items that are remarkably indistinguishable from the real thing. Because most of the animal-derived meat in fast-food items is processed, breaded, or hidden behind a layer of sauces, Burger King’s vegan pop-up has the added benefit of demonstrating that plant-based goods can easily replace the whole fast-food menu.

Burger King has dabbled with this notion in many marketing efforts, most notably with their new vegan chicken nuggets, which are described as “chicken nuggets that got [sic] no chicken … but taste like chicken.”   In Costa Rica, Mexico, Brazil, and Germany, the chain’s prior “Meat?” campaign established parallels between the aesthetic similarity of meat items and their plant-based alternatives.

Fast-food aficionados cheered when Burger King first released a vegan-friendly version of their renowned Whopper in the United States in 2019, substituting the beef patty with a plant-based Impossible Burger. It wasn’t long before the vegetarian dish extended to all stores nationwide. The same was true in the United Kingdom, where veganism has taken off faster than in North America, which may explain why Burger King chose to test a vegan branch in the country’s capital.

While the company’s Plant-Based Whopper, Vegan Royale, and Vegan Nuggets will remain on the menu at all UK locations, Burger King is considering expanding some of the vegan pop-up’s popular dishes to other locations in order to meet the company’s goal of offering a 50 percent meat-free menu by 2030.

Burger King’s vegan Leicester Square location isn’t the first to become meatless, but it might be the first to go completely vegan. For a month last year, the firm turned one of its locations in Spain into a meat-free utopia. The Long Vegetal (a plant-based version on the Long Chicken, sometimes known as a “Chicken Royale”), a plant-based Whopper, and vegan chicken nuggets were among the vegetarian products featured at the Madrid location, which were prepared by The Vegetarian Butcher, the company’s European plant-based food supplier. A similar experiment was initially carried out in Germany, where Burger King operated a vegetarian branch in Cologne for a brief time.

Consumers should become accustomed to these changes, according to London-based restaurateur James Lewis, because vegan fast food is the way of the future. Lewis, who co-owns London’s 123V vegan restaurant with Michelin-starred chef Alexis Gauthier, says it’s just a matter of time before all fast-food menus are vegan.

“Fast food is 100 percent the best area to switch to vegan [food]. The chains are often sneered at by people but they are setting the trends here… There’s no point starting a vegan chain because once McDonald’s figures out how to make a good vegan burger, they will think: ‘What’s the point in the cost of keeping all these animals when we can make it just as good and grow it in the ground?’” Lewis told the Guardian.

Animal agriculture, notably beef production, is the most ecologically harmful sector of the global food business, according to all climate studies. This is due to the high costs of raising, feeding, killing, and packing animals for food. According to a research published in the scientific journal Nature Food in 2021, raising animals for food, as well as cultivating vegetables needed to feed farmed animals destined for slaughter, account for the great majority (59%) of all food production emissions. “Not too long from now, people will be getting their burger and it’ll be a vegan one and that’ll be the norm and they won’t think any different,” Lewis stated.

In the same way, celebrity chef Spike Mendelsohn, who owns the plant-based burger business PLNT Burger in the United States, views the vegan fast-food movement as a precursor to something greater. “There’s a revolution of the plant-based space and we’re living in it right now… People will look back and see this as the moment when everything shifted.” Mendelsohn previously stated,

Although Lewis and Mendelsohn’s projections may appear far-fetched to some, several other large fast-food restaurants have begun to hint towards a future based on plants. “I certainly expect that over time that you will see plant-based [food] on the McDonald’s menu… I think there are going to be some countries that are further along on that than others but I do expect that we will have plant-based on the menu, it’s just a question of when.” Chris Kempczinski, CEO of the McDonald’s Corporation, told CNBC in 2020.

After testing iterations of a meatless burger in Canada and several European countries, including Sweden, Denmark, the Netherlands, and Austria, McDonald’s launched its first meatless burger, the McPlant—made in partnership with vegan brand Beyond Meat—at select locations across the US not long after this interview.

Similarly, KFC has been testing vegetarian versions of their iconic fried chicken with Beyond Meat since 2019. The chicken behemoth put the Beyond Fried Chicken to a countrywide test at its more than 4,000 sites at the start of this year.

Following a backlash over its tuna fish sandwiches, sandwich company Subway has pledged to offer more vegan choices. Last year, a lawsuit alleged that Subway, the world’s largest sandwich chain with over 40,000 stores, was selling its renowned tuna sandwiches with a “mixture of various concoctions.” The plaintiffs claimed that the star component was “made from anything but tuna” and wasn’t what it was advertised to be.

Good Catch Foods, a vegan seafood business that debuted with vegan tuna in 2019, took advantage of the chance and toured Subway outlets with food trucks branded as “Our Way” in the familiar Subway typeface. To persuade Subway to give up fish for good, the trucks distributed “real” vegan tuna sandwiches outside of certain Subway restaurants in three cities.

This effort not only forced Subway to introduce additional vegan alternatives, but it also emphasized the unrecognizable nature of fast-food meat, which, for the sake of animals, humans, and the environment, may just as easily be manufactured from plants.

Source: “BURGER KING’S VEGAN POP-UP SERVES AS A ROADMAP FOR THE FAST-FOOD INDUSTRY” by VegNews