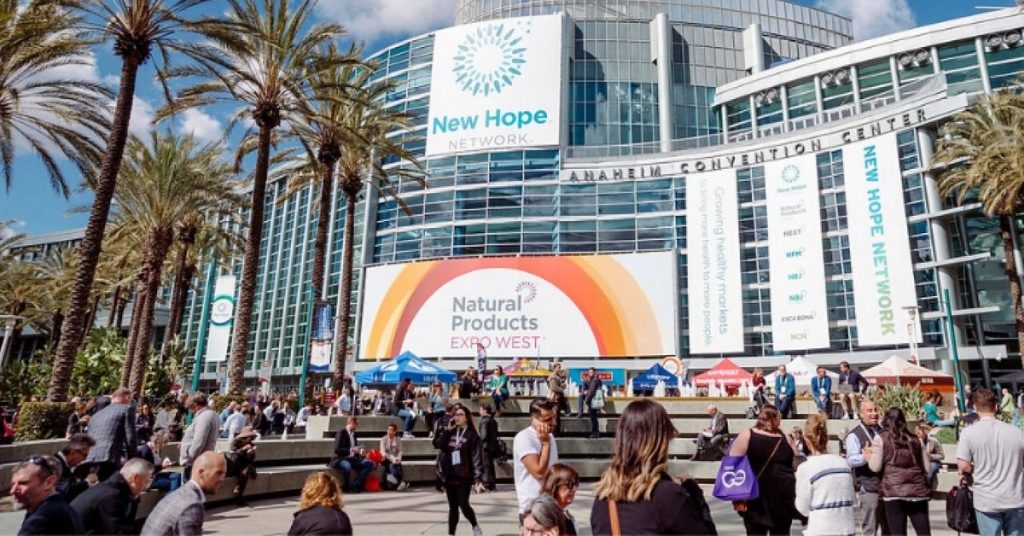 Natural Products Expo West is considered the largest event focused on natural, organic and healthy products in the US, taking place every March at the Anaheim Convention Center in Southern California. This year, over 2,700 exhibitors filled the nearly 480,000 square foot venue. vKind’s very own Jia Dadabhoy had the opportunity to take part in the event and speak to some of the world’s most important vegan brands in person.

Among the notable names present was Califia Farms, one of the most prominent plant-based milk brands in the world, founded in California in 2010.

“We were one of the early movers,” said Katrina Picon, Director of Communications at Califa Farms, ” We really started in the natural space, plant-based food and milk, etc. That’s kind of where we really gained popularity, from the natural space,” Now we’re just seeing greater adoption across the board, consumers who aren’t even necessarily themselves vegan but are curious.”

Another animal-free brand that dropped in to the event was the plant-based cheese company GOOD PLANeT, displaying its new vegan smoked cheese wheels, created from allergen-free ingredients. “Ours is the only plant-based cheese that is using a real smoked process,” said Virginia Wong, Director of Marketing at GOOD PLANeT.

Regarding the remarkable growth of the plant-based space, Wong added that, “it’s been amazing to see how plant-based in general has been growing. There’s meat, jerky, and seafood. It kind of gives you this sense of community. It’s really exciting to see how embraced it is, by everyone, not just vegans. I love that.”

Another vegan cheese company making its voice heard at the event was Daiya, now a globally recognized vegan brand. As stated by the company’s VP of Marketing, Dan Hua, “Vegans are the core of our consumer target, but we’ve also expanded to be more plant-based, so that people who are vegetarians are also in the marketplace. By delivering great tasting products, not only do we appeal to vegans, but we also have a broader mainstream appeal that has helped us to grow tremendously.”

Agung Wimboprasetyo, founder of the Good Vibes Society, an independent craft coffee brewer that only works with sustainable and ethically sourced goods, expressed his enthusiasm at the event.

“This is a big expo. My experience has been amazing. So many awesome people. So many plant-based options, and a lot of them are so good. I’m not gonna lie, I was a little intimidated at first, everybody with a nice booth and everything, but it’s a great experience and I’ve been enjoying every minute of it” Wimboprasetyo said.

The coffee industry has been a key player in the beverage space for centuries, but with the explosion of the plant-based sector, vegan creams and milks have become indispensable for ethical and eco-conscious coffee consumers.

Companies such as Miyoko’s Creamery have played a monumental role in expanding the vegan market. Miyoko Schinner, founder of the California-based alt-dairy brand, which last year launched its very own Vegan Butter Channel, offered her thoughts on the event.

“I’m here at Expo West for the first time in two years and the scene here is absolutely rocking,” Schinner said, Every aisle here is full of vegan products.”

Miyoko also mentioned how some of the products labeled “plant-based” at Expo West had animal products, and emphasized the importance of brands going fully vegan.

Making his way from Hong Kong was David Yeung, winner of the “Social Entrepreneur of the Year 2018” award by the World Economic Forum and Schwab Foundation, and founder and CEO of OmniFoods and Green Monday.

“First of all, it’s great to have this show for the first time in three years and to see such a big turnout,” Yeung said, “Plant-based, of course, must continue to grow for the benefit of the planet, for humanity and for animals. The planet cannot sustain the way we eat right now. Change must happen.”

Also in attendance was vegan seafood company Sophie’s Kitchen. With demand for traditional seafood projected to increase by as much as 30% by 2030, at a time when around 70% of the world’s fisheries are exploited or depleted due to overfishing, companies like Sophie’s Kitchen could have a major positive impact .

“We have new products right now that are launching at the expo,” said Dr. Miles Woodruff, CEO of Sophie’s Kitchen, “We have whitefish and a salmon burger. Both of these products have the texture and the taste of fish. A lot of companies have soy or gluten or wheat. We keep all that out.”

Founders and directors of other well-known vegan brands at Expo West weighed in with their thoughts:

“TofuTown started in 1981 with the production of tofu, before the introduction of the so called technofood industry. We don’t believe in that, and we still do what we did forty years ago. Only organic, natural and vegan.”

“We don’t want you to sacrifice healthiness for happiness. That’s the hardest thing that vegans have, finding food they can really enjoy without having to sacrifice the original flavor. Being here [at Expo West] after two years has been so fun, seeing all the faces try these products that we’re introducing. We truly love the expressions on everyone’s face.”

“Initially there were a lot more simpler and smaller brands, coming out with plant based branding at the same time. As consumers are getting more educated, they look at the label and realize it’s not that clean and not as healthy as they thought. We, as the leading tofu company, wanted to make it better for you, so we launched our ‘Plantspired’ brand launch here.. It’s all ready to enjoy because we are eliminating those tofu imitations in case you do not know how to cook them. We are also launching our 100% plant-based steak next month and are really starting to bring that to life. There will be a simple difference between other brands, what’s out there already, and us.It’s simpler and cleaner, and it tastes amazing, too.”

I grew up eating the world’s finest real deli sandwiches. After I became vegan for the animals and the earth and my own health, I realized I couldn’t find a good deli sandwich to save my life, so I founded Uneal Deli, starting in my home kitchen. I brought it to Shark Tank and thousands of retailers across the country, and we’re now growing into service delis. Being at Expo West is an extremely exhilarating experience, seeing all the vegan and plant-based companies just shows that this truly is the future of food. This is not a fad. The people have spoken.”