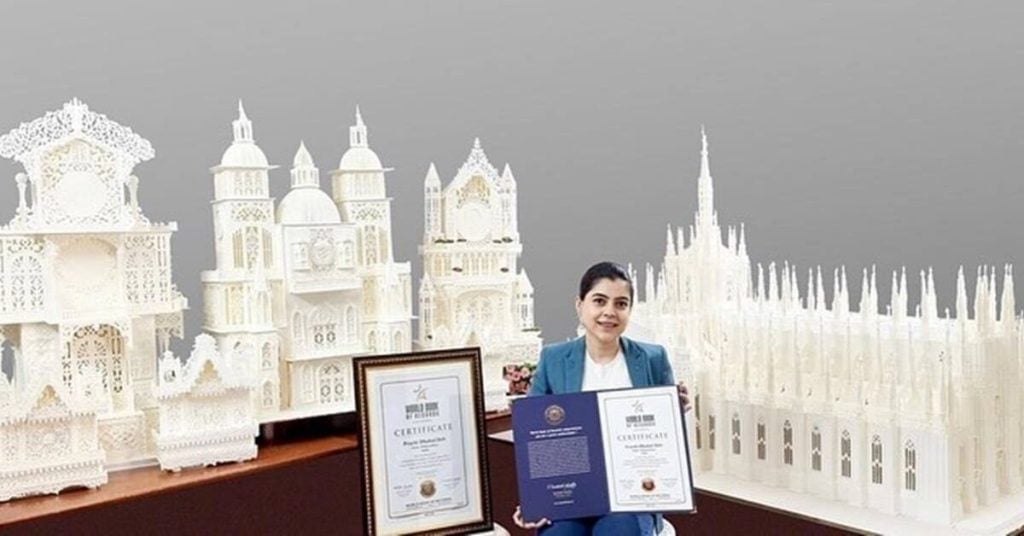 The experienced baker from Pune, western India, is recognized for her personalized handcrafted cakes that are influenced by creative aspects from all around the world.

Deb’s recent work included the famed Milan Cathedral, which was roughly 1.9 meters long, 1.4 meters tall, and over a meter broad, earning her a place in The World Book of Records for Biggest Royal Icing Structure.

She stated that planning and preparing for the Building took over a month since she needed to pipe around 1,500 components to make the vegan-friendly reproduction of the cathedral.

“Royal Icing is one of the most traditional mediums of cake decorating, and is also the most versatile.”

“As the traditional recipe of royal icing has eggs, I wanted to make it suitable for the Indian market and the vegan community, so I developed an egg-free, vegan version of royal icing,” Deb said.

Recognizing that an increasing number of individuals are switching to a plant-based diet, the cake designer has established her own vegan icing brand, Vegan Royal Icing, in conjunction with Sugarin, an Indian cake décor firm.

Deb began her career as a royal icer in 2015, after being offered the opportunity to train from Sir Eddie Spencer MBE, the royal family’s official cake decorator.

Deb wanted to commemorate her ten years of baking by creating a one-of-a-kind royal icing structure.

“I have always been fascinated with the beauty and elegance of Victorian and European architecture. The Milan Cathedral, being one of such iconic monuments around, has the grandeur and the regal elements that are a perfect blend of beauty and aesthetics.”