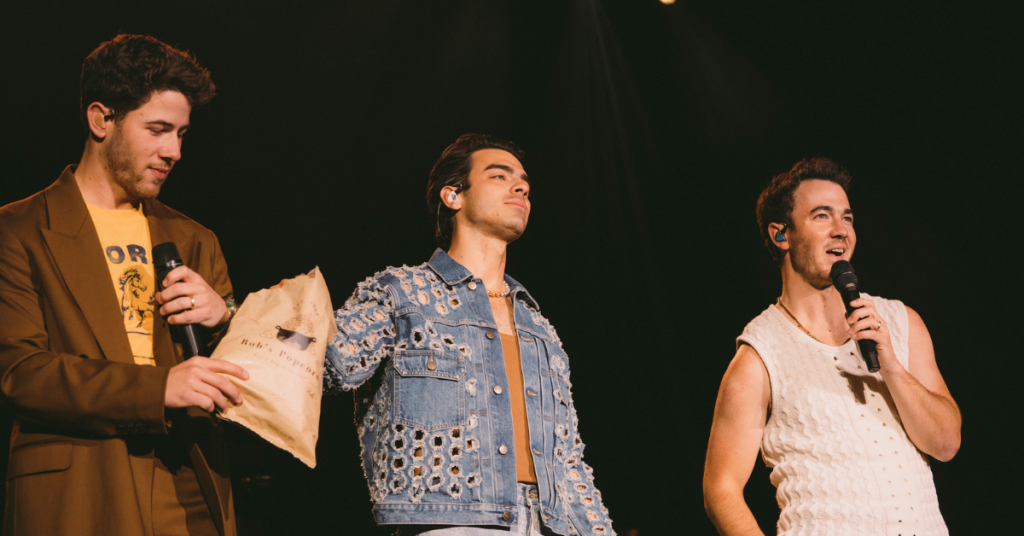 The Jonas Brothers, a pop rock band, debuted Rob’s Backstage Popcorn, their favorite vegan snack, at 2,800 Walmart locations throughout the country this week. The specifically seasoned vegan brand was created by Nick, Joe, and Kevin Jonas with next-gen consumer goods company The Naked Market and first offered to customers in 2021 during the Jonas Brothers Remember This Tour.

Rob Garbowsky, a co-founder of the brand who introduced the brothers to his popcorn during rehearsals and performances, is the “Rob” behind Rob’s Backstage Popcorn. The brothers enjoyed the popcorn so much that it became the unofficial snack of their 2019 Happiness Begins tour.

“When we first tried the popcorn, we fell in love with it… The unique seasoning was unlike anything we had ever tasted before; it was like home cooking in a bag. After keeping it to ourselves, we are excited to share it with the nation through our collaboration with Walmart who is now offering Rob’s Backstage Popcorn across the country,” the Jonas Brothers said in a statement.

The Jonas Brothers have been enjoying vegan popcorn backstage for years and have chosen to share their enjoyment of the product with the rest of the world through Rob’s Backstage Popcorn. Rob Garbowsky, the father of longtime Jonas Brothers friend Greg Garbowsky, who used to play bass guitar for the band and is now part of their management team, developed the recipe for the vegan snack.

Rob Garbowsky created Rob’s Backstage Popcorn, which has a unique flavor that is sweet and salty at the same time, and has been enjoying it with his family. He is excited to share it with popcorn fans around. In a statement, Rob Garbowsky stated,  “I never imagined something that started as a snack I would make for my family would end up in Walmart… We are so excited to bring my recipe to families across the country, and hope they love it as much as we do.”

The new vegan popcorn is $3.98 a bag at Walmart and can also be ordered directly from Rob’s Backstage Popcorn’s website.

The Jonas Brothers are the most recent celebrity to endorse vegan food and delights. Scottie Pippen, the great basketball star, established his own popcorn company, Husk, last year. The brand was created to provide an organic and nutritious snacking choice, and Pippen debuted it in six different flavors, some of which were prepared using coconut milk and nutritional yeast to provide a cheese flavor without the use of dairy.

In the sweet snacks area, actor Noah Schnapp (Will Byers on Netflix’s Stranger Things) established his TBH (acronym for “to be honest”) business last year with a vegan Nutella-inspired spread. The hazelnut cocoa spread is a healthier alternative to Schnapp’s favorite childhood snack because it doesn’t include harmful elements like dairy or palm oil.  “Hazelnut spread on toast has always been my favorite comfort food, but of course, when I was a kid, I didn’t realize that my snack habit wasn’t very good for me or the environment… Once I found that out, I wanted to create a new take on hazelnut cocoa spread with honesty and sustainability at its heart, and found the perfect team to help that vision come to life,” Schnapp stated.

Vegan food companies are attracting celebrity investors as well. HIPPEAS is a vegan food company that creates chickpea-based snacks. In 2017, Leonardo DiCaprio invested an unknown amount in the company. DiCaprio, a longtime environmentalist who recently appeared in the dark comedy Don’t Look Up about the climate problem, has subsequently invested in other items and technology (such as cultured meat) that help develop a food system that isn’t reliant on animal agriculture.

Snoop Dogg, actress Daniella Monet, NBA player Javale McGee, professional skateboarder Rob Dyrdek, and others are among the investors of vegan snack brand Outstanding Foods, which is known for its PigOut Pigless Pork Rinds. The company is presently extending its snack collection to include vegan cheese balls, which should be available in shops next month.