Jane Velez-Mitchell Delivers A Masterclass On How To Pivot & Build a Vegan Empire! 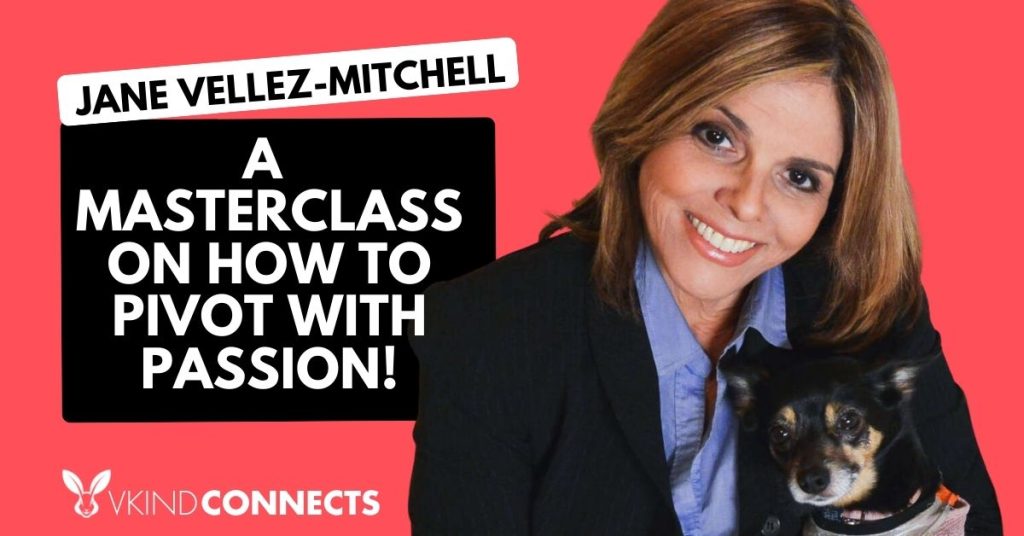 When asked how she became a “plant-based media mogul”, Velez Mitchell responds by saying she doesn’t consider herself a mogul by any means, but thanks Shabnam Islam for her kind words. The founder of Unchained TV goes on to clarify that she had originally started a non-profit “AKA, a money pit”.

Born in midtown Manhattan to a Puerto Rican mother and an Irish-American father, Velez-Mitchell explains how she often attended protests as a youth and went on to become a student at NYU.

As to the beginnings of her passion for animal rights, the vegan celebrity explains how a video of a primate undergoing a cruel experiment changed her life, and how she said to herself “something has to be done”. She delves into the details of how she ended up as an anchor in LA and eventually interviewing Howard Lyman, the fourth-generation cattle rancher turned animal activist and author of Mad Cowboy, and how he and his publicist convinced her to go from vegetarian to fully vegan.

Islam asks Velez Mitchell why she decided to make the shift from traditional television and create a vegan digital news network like Unchained TV, to which she reminisces on the days she had her own show on CNN called “Issues with Jane Velez Mitchell”, where once a week she spoke about animal rights and the horrors of the factory farming industry.

“I thought, well, that little segment I did once a week, why don’t I just do that full time and make that my thing?” she says, before adding how she started going to protests in New York City and realizing they were being largely ignored by the public.

Velez-Mitchell discusses the “need to graduate, to pivot, pivot, pivot”, which led her to start her own Hollywood-level in-studio vegan cooking show called “New Day New Chef” (which won two taste awards), and her documentary “Countdown to Year Zero”.

“What’s the next pivot?” Velez-Mitchell asks rhetorically, in reference to her most recent endeavors. “The next pivot is… wow let’s start our own streaming network! That’s where television is going, so that’s why we started Unchained TV.”

The creator of the free vegan streaming network proudly expresses how the producers of Unchained TV are “pleased and honored to be collaborating with vKind and some of their incredible videos, YOUR incredible videos”.

Jane Velez Mitchell goes on to clarify that Unchained TV is “not our app, not our streaming network, it belongs to the entire vegan animal rights community. It’s a non-profit. You have videos, contact us and let’s put them up there.”

She specifies how the vegan streaming channel can be obtained on a Roku device, Amazon Firestick, Apple TV device, and more. An enthusiastic Velez Mitchell adds that the channel can be viewed on a smartphone. “The whole point is to make it absolutely easy and free for people to just go in there and see all sorts of movies, documentaries, cooking shows, travel shows… we just finished shooting the first ever, in history, reality TV series starring a family of pigs.”

The vegan icon explains with greater detail about how Unchained TV created this kind of documentary, and why this vegan streaming channel is so special. Velez Mitchell and Islam go on to discuss the health benefits of a plant-based diet, the myths about meat consumption and protein, and the origin of the Covid pandemic.

“We are trying to get the truth out to people. This is a very good technology to do so. First of all, we have to use every technology available. There are 8 billion people on this planet, we can’t talk to them one on one,” says Velez Mitchell about the vegan streaming channel before also underscoring the need to educate viewers in a way that is entertaining and fun.

Dr. Shabnam next asks what’s next for Unchained TV, when Velez Mitchell admits they are currently in the process of editing the pig documentary, called Pig little lies. She goes on to say “we also have a plan down the road to do kind of a vegan Shark Tank”, which will actually focus on helping small mom-and-pop vegan businesses, but without explicit winners or losers.

“Veganism is all about putting on a new set of glasses to approach the world. Nobody has to die for me to have a good life.”

Unchained TV is a digital news network for animal rights and the globally conscious vegan. The network showcases everything vegan, from festivals to animal rights conferences and vegan cooking.

VKind is happy to announce that it’s new vegan cooking competition TV show, Peeled™ will also be streaming on UnchainedTV this Fall!