A New Vegan Butcher Shop by The Very Good Butchers is now open! 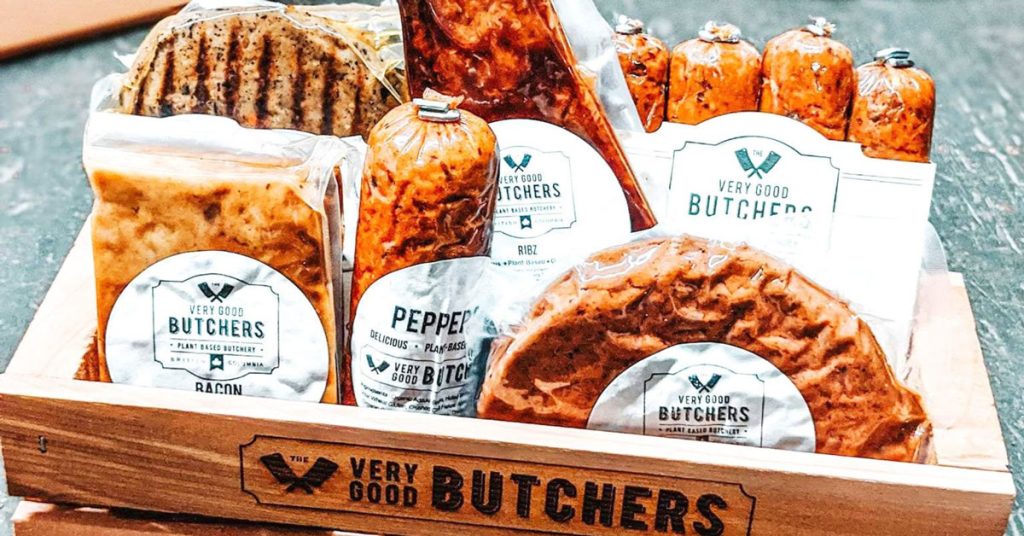 Up Next: North American Expansion

The Very Good Butchers (VGB), a Canadian vegan meat company, launched its second plant-based butcher shop in downtown Victoria, BC, on October 6. The shop will function as a restaurant, vegan butcher shop, and retail space, with breakfast, lunch, dinner, bar, and bakery menus, as well as a deli case where customers can buy vegan deli-style meats to eat at home. The brand is on a quest to expand across North America, and the new shop is just the beginning.

“Our goal has always been to make plant-based eating as easy and accessible as possible, and we realized the need for a sit-down restaurant with delicious vegan dishes,” VBG Co-founder and CEO Mitchell Scott said. “As more and more people are turning to plant-based foods, we’re excited to continue growing and opening more butcher shops and restaurants across North America. With our outdoor patio and the ability to serve an extended beverage menu including beer and wine, we’re hopeful our new butcher shop will become a local favorite.”

VGB began selling their handcrafted vegan cheese and meats produced with whole food ingredients like beans, grains, veggies, and seasonings at local farmers markets before opening a shop in Victoria in 2016. Through other Canadian merchants, the company swiftly expanded its options to include plant-based burgers, hot dogs, pepperoni, bacon, and steaks, and grew into a larger facility at the Victoria Public Market.

Davison and Scott appeared on the Canadian investment reality show Dragon’s Den in 2018. They pitched their business to six dragons (investors) and served them an all-vegan Christmas dinner featuring their meatless products, including Glaze Roast Beast, Bacon-Wrapped Cocktail Bangers, Truffled Mac, maple and bacon Brussels sprouts, and a charcuterie board with Grilled Smokin’ Sausage, Pepperoni, and Bangers in Blankets.

The Very Good Food Company Inc, VGB’s parent company, began trading on the Canadian Securities Exchange under the symbol “VERY” last year, and its stock jumped by 800 percent within days. By the end of 2020, the company had reported a 582 percent gain in sales over the previous year, thanks to a 1,686 percent increase in orders year over year.

VGB established a new Vancouver production facility earlier this year to raise production capacity by 2,690 percent, with 37 million pounds of output projected in 2021, building on its performance as a publicly traded firm. In order to expand its presence in the United States, the company has struck a distribution partnership with wholesale distributor United Natural Foods.

“Our growth is guided by our simple mission, which is lofty, badass but beautifully simple: Get millions to rethink their food choices while helping them do the world a world of good,” Scott said. “And we are doing this by offering plant-based food options [that are] so delicious and nutritious; we’re helping this kind of diet become the norm.”

Source: “The Very Good Butchers Opens Another Vegan Butcher Shop. Next Up: Expansion Across North America.” by VegNews