The First Vegan Boutique Hotel in Santorini is Now Open! 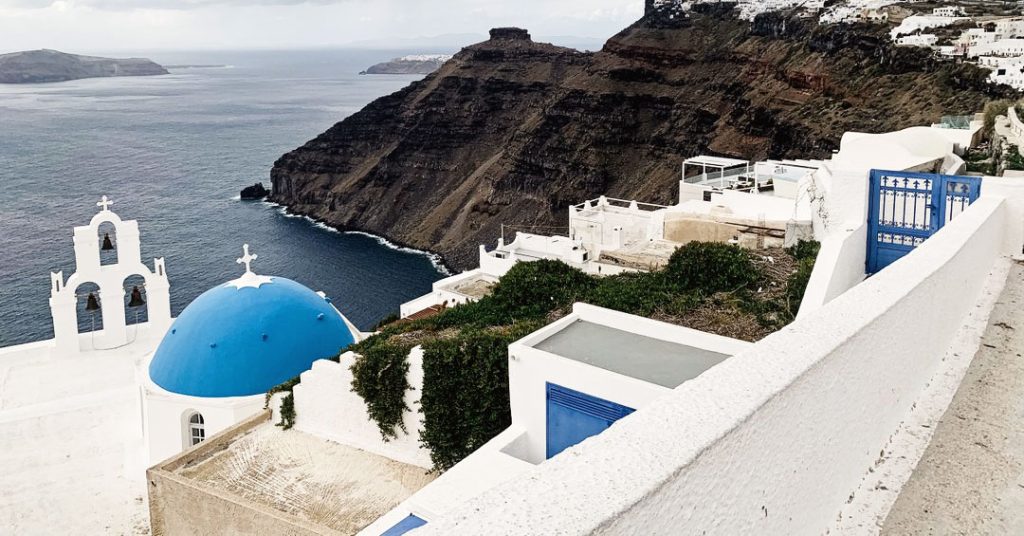 On the Greek island of Santorini, the vegan boutique hotel MOD Santorini has opened. The family-owned hotel had been closed for more than a decade until the owners passed it on to their son, Anargyros (Argiris) Fousteris. He and his partner, Christina Boutrou, are renovating the building into an adults-only vegan hotel.

The first stage of renovations is now complete, and the hotel now has four suites on the first level. MOD will have 12 individual suites on three levels after the project is finished. Two of the suites have an outdoor, wraparound jacuzzi on the balcony overlooking the Aegean Sea, and all rooms have their own unique decor and individual balconies.

The hotel’s furniture and materials, including the bedding and bathing amenities in the suites, were chosen to be not only luxurious but also vegan, cruelty-free, and environmentally friendly. The beds in the rooms are made of natural coconut fibers, while the sheets and towels are created locally from 100% cotton.

A vegan-friendly hotel with all the bells and whistles

MOD has a fully vegan kitchen, and each stay includes a complimentary breakfast. The complimentary breakfast menu is provided to guests’ rooms each morning and includes chickpea flour omelettes, homemade jam with fresh breads, seasonal fruit, and freshly squeezed orange juice. Breakfast items include hazelnut chocolate pancakes, waffles with mixed berries, and spanakopita (a traditional Greek spinach phyllo pastry), as well as cold-pressed juices, smoothies, and lattes on the enlarged room-service menu. Vegan burgers, quinoa Buddha bowls, and falafel wraps, as well as wine and drinks, are on the lunch and evening menus.

Private picnics with sparkling wine and house-made pizzas or a mezze board for two, as well as local vegan cuisine and wine excursions, guided yoga lessons, and visits to traditional villages, are all available at the hotel. With its characteristic whitewashed buildings, high cliffs, and tangerine sunsets, Santorini is one of the most popular Greek islands for exploration. MOD Santorini is offering up to 50% discount for bookings in October as part of its opening month special.

For Fousteris and Boutrou, opening a completely vegan hotel was a no-brainer. “When [I met] Argiris on my summer vacation in 2018, he already had plans to renovate the hotel and his dream was and is still to create something that represented the tradition and heart of his family hotel,” said Boutrou. Boutrou went vegan when she moved to Santorini from her home island of Australia in 2019. When the COVID-19 pandemic struck, the pair began to cook more vegan meals at home and were more committed to the vegan lifestyle.

The pair also realized that traveling as a vegan could be challenging, given the restricted options available on vacation islands like Santorini. “It was clear to us … that we should use our space to cater to our people and create a fully vegan hotel,” Boutrou said. “If I was to cook breakfast, there was no way I was handling animal products. It was a clear path for us and we are proud we took this leap.”

Despite being informed multiple times by friends and family that the notion of a vegan hotel would not work and that they would receive complaints if eggs and bacon were not on the breakfast menu, Boutrou and his wife believed it was the right way to go. “There was no convincing us any other way,” Boutrou said. “It is time the hospitality industry changed [and] we are proud to lead the way for this on our island, Santorini.”

MOD Santorini is the first vegan hotel on the Greek island of Santorini, but it is far from the first in Greece. Koukoumi Hotel debuted last year in the town of Ano Mera on the island of Mykonos. The all-inclusive resort features vegan-themed suites, a spa with vegan and cruelty-free services, a fully stocked gym with trainers offering outdoor fitness sessions, and a vegan restaurant with a breakfast buffet and Greek-inspired meals.