Scientists Create a Vegan GLITTER Made of Cellulose, the Major Component of Cell Walls in Fruits and Vegetables 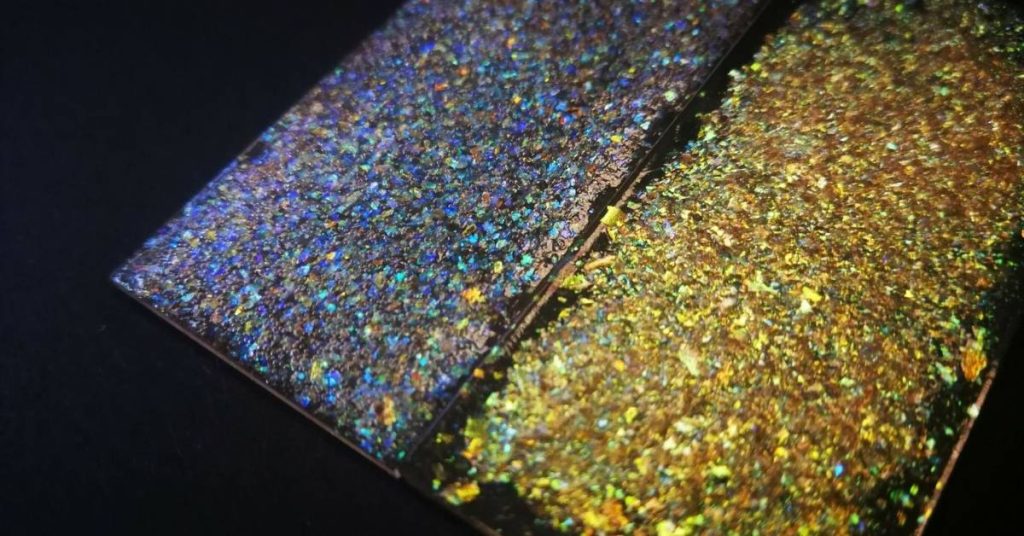 Scientists have created an environmentally friendly “vegan” glitter made from cellulose, the major component of plant, fruit, and vegetable cell walls.

The biodegradable glitter was created at the University of Cambridge using cellulose nanocrystals that can bend light to generate a variety of vibrant colors.

It’s just as bright as ordinary glitter and may be used to dress up food and drink, such as a glass of champagne on special occasions, thanks to its natural plant-based origins.

The color of the vegan glitter particles is also affected by the amount of water they come into contact with.

Despite the fact that more work on the manufacturing process is needed, the researchers hope to develop a spin-off firm to commercialize their glitter in the future years.

Glitter is commonly used in school classrooms, nurseries, and arts and crafts, as well as in make-up worn by teenagers and festival goers.

However, because it is formed of microscopic fragments of plastic, it is just as harmful to the environment as hazardous microbeads, which have previously been prohibited from cosmetics.

Small glitter particles can find their way into water sources, where they might be mistaken for food by marine life, clogging their digestive processes.

It can also harm the eyes; after a 49-year-old woman was nearly blinded by glitter, the British Medical Journal encouraged doctors to keep an eye out for patients complaining of swollen eyes and visual loss.

‘Conventional pigments, like your everyday glitter, are not produced sustainably,’ said Professor Silvia Vignolini from Cambridge’s Department of Chemistry, senior author of a paper describing the new glitter.

‘They get into the soil, the ocean and contribute to an overall level of pollution. Consumers are starting to realize that while glitters are fun, they also have real environmental harms.’

Glitter is a form of very large pigment that belongs to the industry’s ‘effect pigment’ group – in other words, a pigment that gives off colorful colors.

Glitter typically comprises a polymer layer, a thin colored layer, and a reflective layer, which is generally made of aluminum. These are glued together to form a thin sheet, which is then cut into tiny forms.

However, because it is difficult to break these components down into component bits, they cannot be recycled.

Companies often blend mica and titanium dioxide into an effect pigment when they don’t use synthetic polymers for their glitter.

Titanium dioxide, on the other hand, has just been banned in the EU for use in food due to its cancer-causing potential.

Mica extraction, meanwhile, is frequently done in underdeveloped nations, where exploitative practices, such as child labor, are common.

‘Traditionally, effect pigment minerals have to be heated at temperatures as high as 800°C [1,472°F] to form pigment particles…When you consider the quantity of mineral effect pigments that is produced worldwide, you realise that their use is harmful to the planet,’ said study author Benjamin Droguet at Cambridge.

The researchers start with cellulose nanocrystals, which are unique nanomaterials generated from cellulose, the most abundant and nearly inexhaustible natural polymer.

Cellulose nanocrystals have the ability to bend light in such a way that it creates vibrant colors. Butterfly wings and peacock feathers, for example, are produced by the same phenomenon, which results in some of nature’s finest colors.

According to the researchers, the vivid hues emitted by cellulose nanocrystals do not fade even after a century.

The researchers started with a commercially accessible batch of cellulose nanocrystals produced from plants like wood, but they could also be extracted from any sort of agricultural waste containing cellulose.

‘These nanocrystals have the ability to self-assemble spontaneously upon water removal into structures which reflect light (the color you see),’ Droguet stated.

‘After complete drying, we retrieve films that reflect a color. These films can then be ground into particles of different sizes.’

The researchers employed roll-to-roll procedures similar to those used to create paper from wood pulp to make films of cellulose nanocrystals at scale.

According to the researchers, the entire process is not just significantly less energy-intensive than traditional approaches, but it is also compatible with existing industrial-scale machines.

Plastic glitter particles and microscopic mineral effect pigments are commonly used in cosmetics, and vegan glitter might be used to replace them.

Every year, the cosmetics business in Europe utilizes around 5,500 tons of microplastics.

‘The technology we developed allows to produce both large colored particles (that can be used as “your everyday glitter”) and smaller particles that can be used for a glittery effect such as in make-up,’ Droguet stated.

‘”Everyday glitter” is the most well-known effect pigment in this context since it is made up of large particles that people perceive and utilize for festive events.

‘People are less aware of smaller “effect pigment” particles but the fact is that they encounter them in their daily life without thinking about it.

‘For instance, 30 percent of car paints in Europe contain [the smaller] effect pigments to give the sparkly appearance that customers like.’

The vegan glitter has been detailed further in the study, published in the journal Nature Materials.