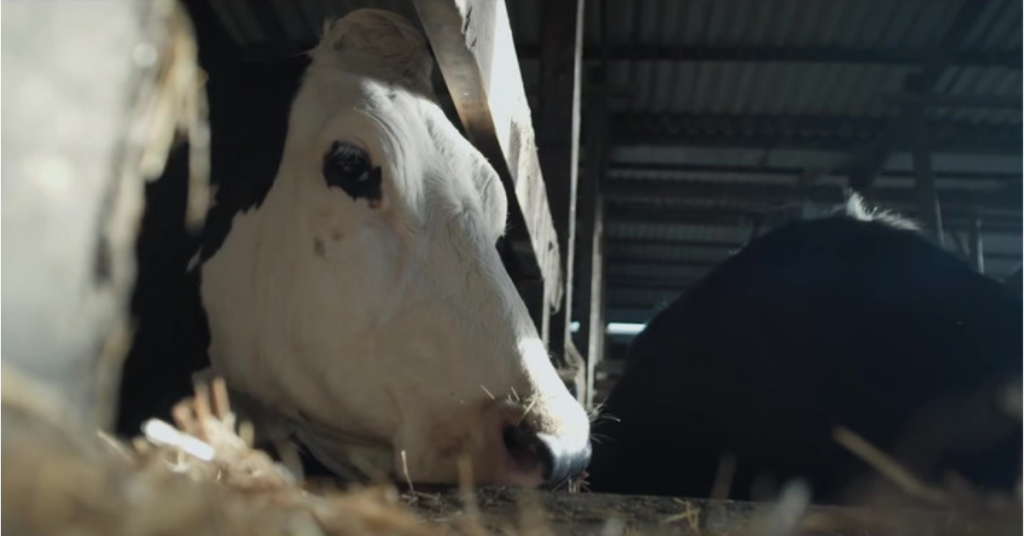 Luma, a milk cow, is the subject of a heartbreaking documentary called Cow. The movie was recorded over the course of four years on a remote farm in England, and it depicts the never-ending cycle of emotional and physical torment that cows face on dairy farms.

Andrea Arnold’s first feature-length documentary, Cow, was nominated for an Academy Award. She and Polish cinematographer Magda Kowalczyk employed handheld cameras to get a true sense of her subjects’ perspectives. The whole picture is seen through the eyes of the mother cow as her body deteriorates as a result of years of maltreatment.

Luma gives birth to her daughter, who is quickly whisked away by farmworkers as her mother screams out in anguish. Luma’s daughters, both ruthlessly ripped from their mother’s side, are introduced to the audience. Such stunning instances highlight the anguish that mother cows throughout the world go through for the purpose of dairy.

“I’ve had plenty of people say to me afterwards they had no clue that’s how milk came about. Obviously they knew milk came from cows, but they didn’t realize that calves were taken to produce milk,” Arnold stated.

Luma’s repetitive routine is captured in the 94-minute documentary, which not only portrays the crushing sadness of losing her babies, but also follows Luma through her daily routine. She is forcibly pregnant and milked in dark milking sheds. She has a child, and the cycle begins all over again. When the cows are momentarily released onto verdant pastures, the video delivers a brief moment of joy. The situation just emphasizes their miserable existence.

“A lot of my friends were crying at that screening. The next night, we had another screening, and it was the same. I think lots of people don’t always know why it’s affected them in that way,” said Arnold.

Cow and Gunda are two films that do a good job of portraying viewers to the world through the eyes of animals. They are neither narrated nor do they have a goal; they just display reality. And the truth is that animals suffer tremendously so that humans can eat meat, milk, and eggs.

While the film had its world debut at Cannes, it was released in UK theaters on January 14 and will be available to stream on MUBI in mid-February.