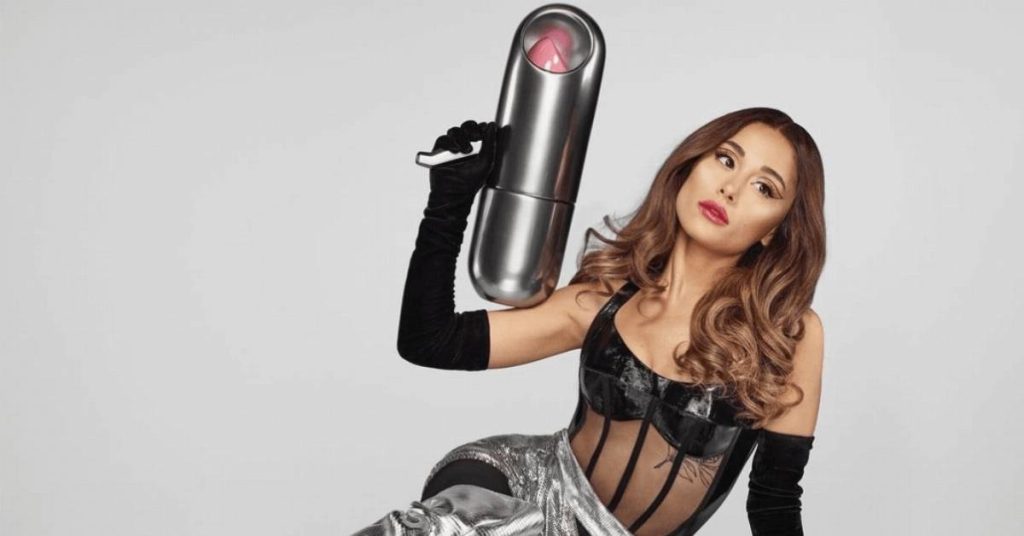 Ariana Grande, the pop star and longtime vegan, will launch her first makeup line, r.e.m beauty, on Friday. Grande has been working on the brand with Forma Brands for some years, and it features her characteristic mod ’50s and ’60s look with an interstellar twist. “I began quietly working on this two years ago while on tour, and I’m beyond excited to finally tell you a bit about it, and for it to become yours this fall,” Grande stated on social media.

The line will be released in stages, with the first installment (called “chapter 1: ultraviolet) focusing on the eyes. “They’re our main storytellers and sources of communication…I feel like you can emote more with your eyes than you can articulate sometimes,” Grande told Allure in an exclusive interview.

A tingling lip-plumping gloss in ten shades, including clear ($17); matte lipstick in a spectrum of six nude shades ($19); and stay-in-place lipstain markers in four berry-inspired shades ($16) are among the items featured in Chapter 1. This collection also contains a ten-shade all-over highlighter topper ($22) that adds shine to the cheeks, eyes, and body.

Future R.e.m cosmetics offerings will all reflect Grande’s own flair, and chapter 2 information is still to be revealed.

Grande grew up eating very little animal products and declared herself a vegan in 2013 on Twitter. While Grande’s vegan journey has a few (non-vegan doughnut-sized) hiccups, the 28-year-old singer’s animal-loving convictions extend to her business ventures.

Grande’s booming perfume business will be supplemented by her new r.e.m beauty line. In 2015, the singer debuted her own line of fragrances, beginning with Ari by Ariana Grande, which contained notes of pear, pink grapefruit, and marshmallow. The singer has now produced several fragrances inspired by her albums, songs, and interests, including Cloud (an uplifting smell with notes of lavender blossom, juicy pear, and bergamot); Thank You Next (inspired by Grande’s 2018 song); and R.E.M. (inspired by Grande’s 2018 song) (a science-fiction inspired fragrance housed in a crystal-covered bottle).

Grande’s newest scent, God Is A Woman, was released in July and is inspired by her 2018 hit single. The cruelty-free and vegan fragrance is currently available at ULTA beauty stores nationwide and is made up of 91 percent naturally sourced ingredients. Grande sought a trademark for “God Is A Woman” soon after the scent was released, raising rumors about a possible beauty line.

Halsey is one of a rising number of celebrities who have lately started vegan beauty products. The Grammy Award-nominated musician created vegan makeup brand about-face earlier this year, after a 12-year development period. Halsey’s vegan makeup line includes 40 items, including application tools, ranging in price from $17 to $32, all of which are made with vegan materials and not tested on animals. Fractal, a futuristic collection of 21 sparkly, highly pigmented, and reflective items, was released on September 14 by Halsey.

Selena Gomez’s vegan beauty line, Rare Beauty, debuted at Sephora recently. With a collection of no-fuss goods, the brand hopes to promote inclusion, natural beauty, and mental health. Rare Beauty provides a portion of its profits to the Rare Impact Fund, which Gomez established with the goal of earning $100 million over the next ten years to help expand mental health resources.

With the introduction of her Totally Plastic Collection at ULTA, Australian rapper Iggy Azalea has also gotten into vegan makeup. The line, which was created in collaboration with vegan cosmetics manufacturer BH Cosmetics, is inspired by Azalea’s teenage years in the 2000s, with a nod to glittering, frosted hues and high-shine lip glosses.

Grande acknowledges that the beauty market is becoming “crowded” with brands founded by fellow performers, but she sees this as a positive development.