The Best Vegan Ice Cream (in the United States) 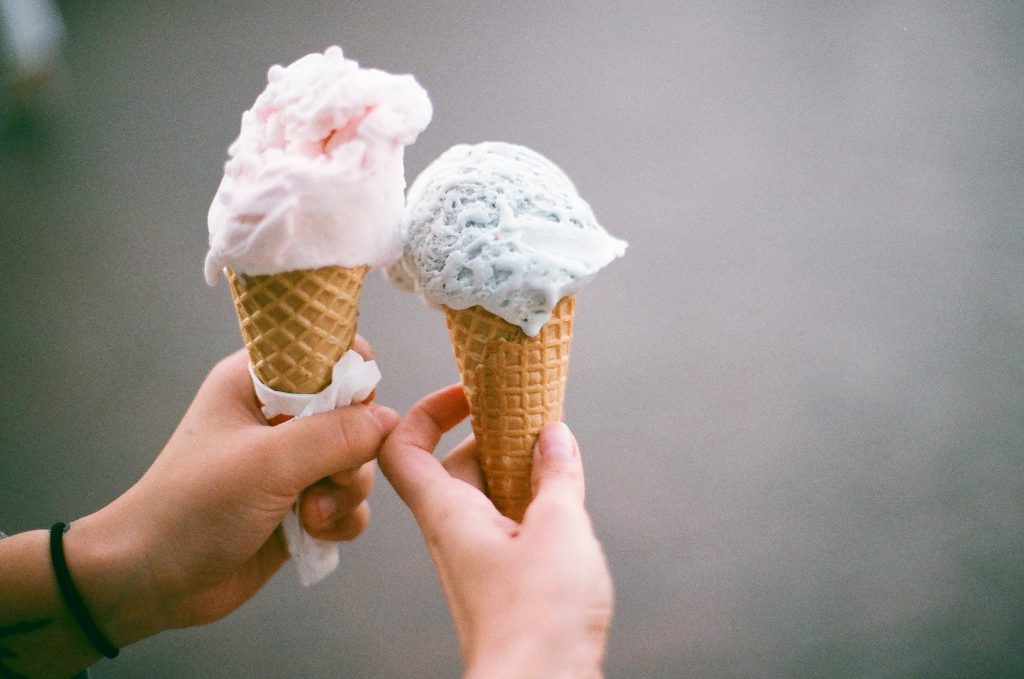 Some people say they can’t ever go vegan because they can’t live without cheese or ice cream. But with so many amazing vegan cheeses out there, that’s no longer an excuse.

The same with ice cream! Vegan ice cream is just as delicious as the dairy version, often with half the fat and calories.

Are you on the lookout for the best vegan ice cream?

We have the scoop for you!

Check the vKind directory for a full list of vegan ice cream suppliers:

We’ve rounded up some of the best vegan ice cream shops across the country below. Many of these icy vegan treats can even be ordered online and delivered to your door. But won’t it melt?! You may be asking yourself this very valid question… But the secret answer is: dry ice. Thanks to its magic, ice cream can travel across the country to your doorstep!

You can order online from many of the vegan ice cream suppliers on our directory for local and nationwide delivery.

Keep an eye out for this icon

The non-dairy delights whipped up at women-owned Kula Ice Cream are also gluten-free, with sugar-free options to boot for those watching their sweet tooth. Cashews and almonds are the main ingredient here but there are also nut-free versions using coconut, seeds, and avocado to create the creamy base.

If you’re looking for nut-free yumminess, dip your spoon into their otherworldly Unicorn Poop, a cheeky flavour with a creamy coconut base, and white chocolate and marshmallow chunks to bite into. Or have a lick of the Sunflower Rum Raspberry: it’s made with sunflower seeds and jazzed up with raspberry swirl and a splash of rum.

You can find Kula Ice Cream at farmers’ markets and restaurants in San Diego, Encinitas, and Carlsbad, or order online for delivery to your San Diego doorstep every Thursday and Friday. 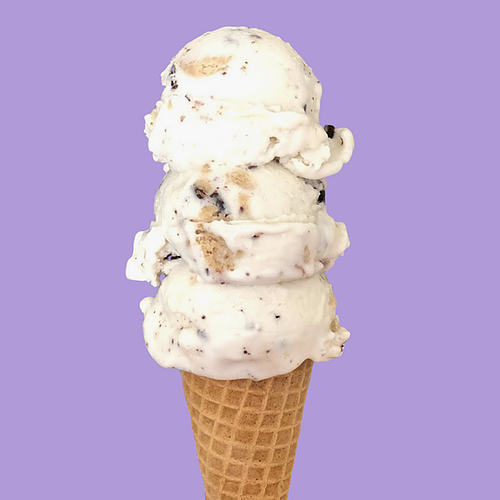 Coconut milk provides the creaminess in NadaMoo’s vegan ice cream treats. The other one is agave nectar, a low glycemic sweetener, which means their ice cream is also sugar- and guilt-free!

The NadaMoo website declares that their mission is “to make the world happier and healthier, one scoop at a time.” This family-run business ticks all the right boxes, using fair trade certified ingredients and eco-friendly packaging.

And by using coconut milk, the earth can smile too. It’s a more sustainable option than soy or almond because coconuts are harvested from trees without harming them so that they keep producing more year after year.

Have a peek at which stores stock NadaMoo near you, or just put in your order online. They ship across the country 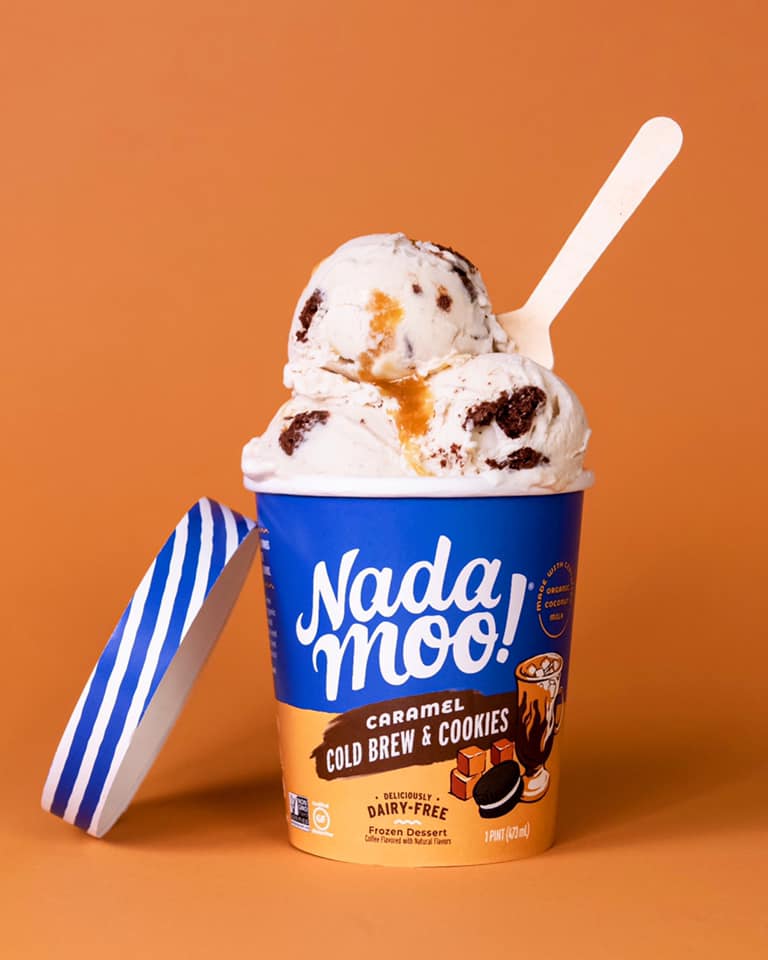 Online Ordering for Pick Up

Everyone needs a hug… and ice cream! Vegans included.

Take a peek at the menu and you’ll see there’s lots of dairy-free treats to indulge in: from cones to pints or bowls, sammiches, and speciality milkshakes.

For the ultimate mood booster, ask for a Brownie A La Mode: a gluten-free brownie topped with your favorite ice cream flavors and the toppings of your choice. A hug on a plate! 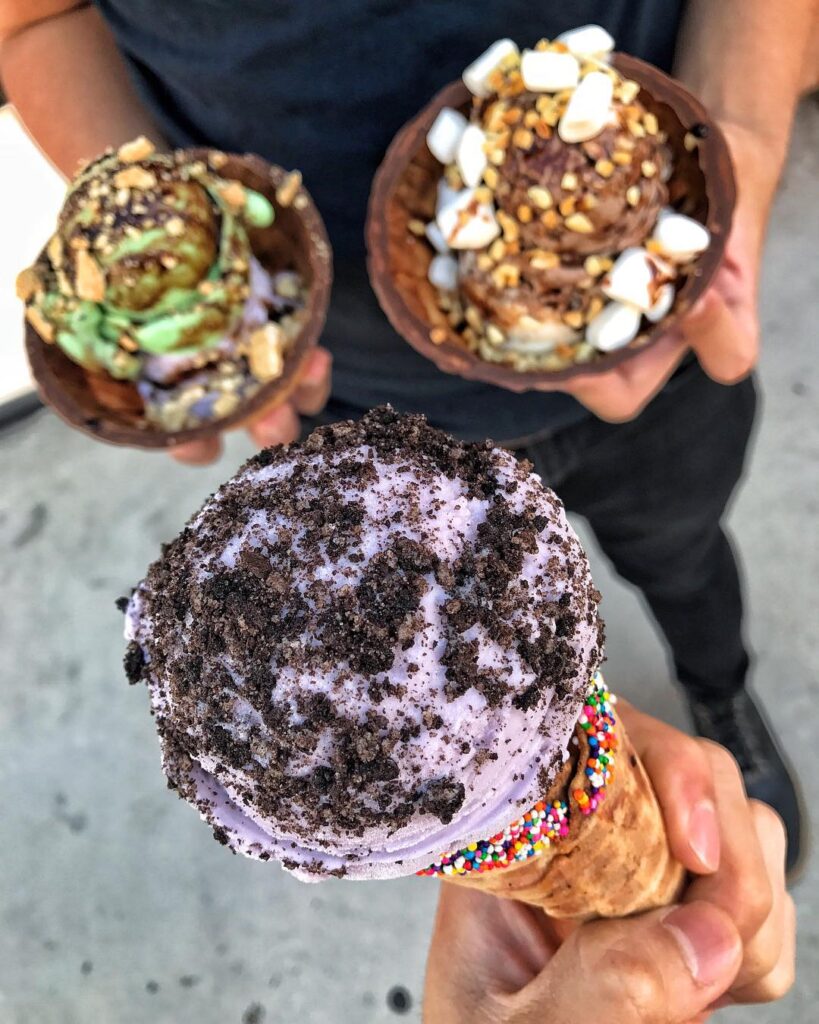 Revolution Gelato makes some of the country’s best vegan ice cream, and have multiple awards to prove it. Their awesome gelato has won Best Dessert, Best New Dessert, and even Best Dairy! That’s pretty amazing for a non-dairy vegan ice cream!

Especially considering that its founder, Jared Olkin, grew up in his mom’s ice cream shop that served up full-fat dairy ice cream. Jared decided it was time for a revolution, and came up with the perfect recipe for vegan ice cream that tastes even better than the full-fat dairy version.

Behind all this creamy vegan deliciousness is a solid company ethos: the Revolution Gelato’s website declares that their revolution “is about fundamentally improving our food system and culture from within. We’re part of the growing movement of people fed up with settling… who are trying to change the status quo.”

Their mini gelato pies, cookie crust filled with gelato and topped with chocolate, are a mini revolution for the taste buds. If you’re ready to take the bite, check out their store locator or buy online. 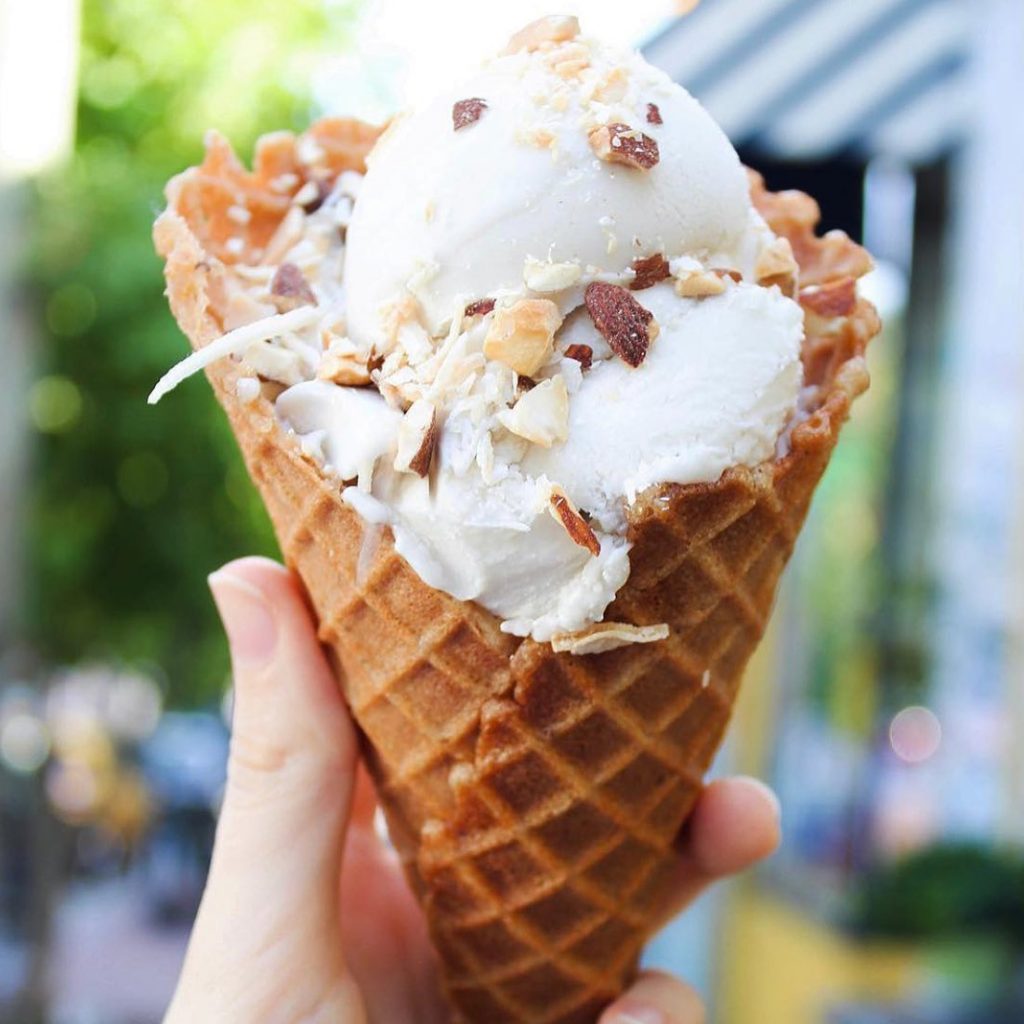 Online Ordering for Pick Up

It’s no secret which nut is blended to create the creamy and delicious base of Cashew Cow‘s vegan ice cream. “So good it’s nuts!” is the witty message that greets you on their website and says it all.

The crew at Cashew Cow like to keep things fresh and innovative. That’s why the flavors available change regularly. But you can be almost sure to find fast favorites like Vanilla (everyone’s number one!), Strawberry, and Cookies & Cream. Lemon Poppyseed is another flavor that customers keep coming back for, as well as their Chocolate Mint whose irresistible ingredient is Thin Mint® Girl Scout cookies.

You can also create your very own cookie sandwich: pick from either a chocolate chip or double chocolate chip cookie and a flavor to fill it with. Or ask for your favorite to be served up in one of their handmade gluten-free waffle cones – plain or chocolate-dipped. A truly decadent treat – and vegan of course!

Order online here and pick up your goodies from their shop. Do you love nothing more than a cone of twirly soft serve? So do we! Like No Udder has some of the best vegan soft serve ice cream around, and guess what? It’s fat-free! This is in addition to 12 flavors of ice cream that can be scooped to your heart’s content at their shop in Providence where all this yumminess is whipped up in small batches.

Like No Udder uses cashew, coconut and peanut to create their non-dairy ice cream wonders, which are homemade of course, and ingredients are organic as much as possible.

For a blast from the past, look out for their Betsy Loo truck at public events and festivals in Rhode Island, Massachusetts and Connecticut from April through October. Run, don’t walk, for your soft serve – like you did when you were a kid!

Have a look at the vegan menus for both the truck and shop here. 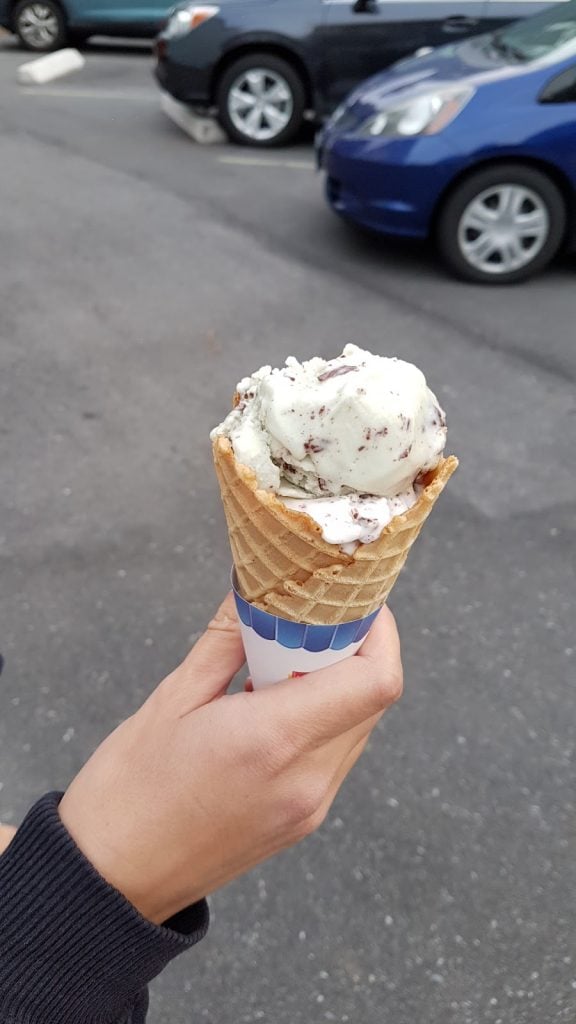 Are you a lover of all things coconut? Then you’ll agree that the best vegan ice cream uses coconut milk as its mouthwatering base. The ice cream creations at Coconut Bliss are also sweetened with coconut syrup for that extra level of coconuttiness.

Order your ice cream in pints or cups, or choose one of their yummy ice cream bars or cookie sandwiches. They also sell a softserve mix that lets you whip up some magic at home.

All the ice creams at Coconut Bliss are not only dairy-free but also organic, ethically-sourced, and all wrapped up in sustainable plant-based packaging. 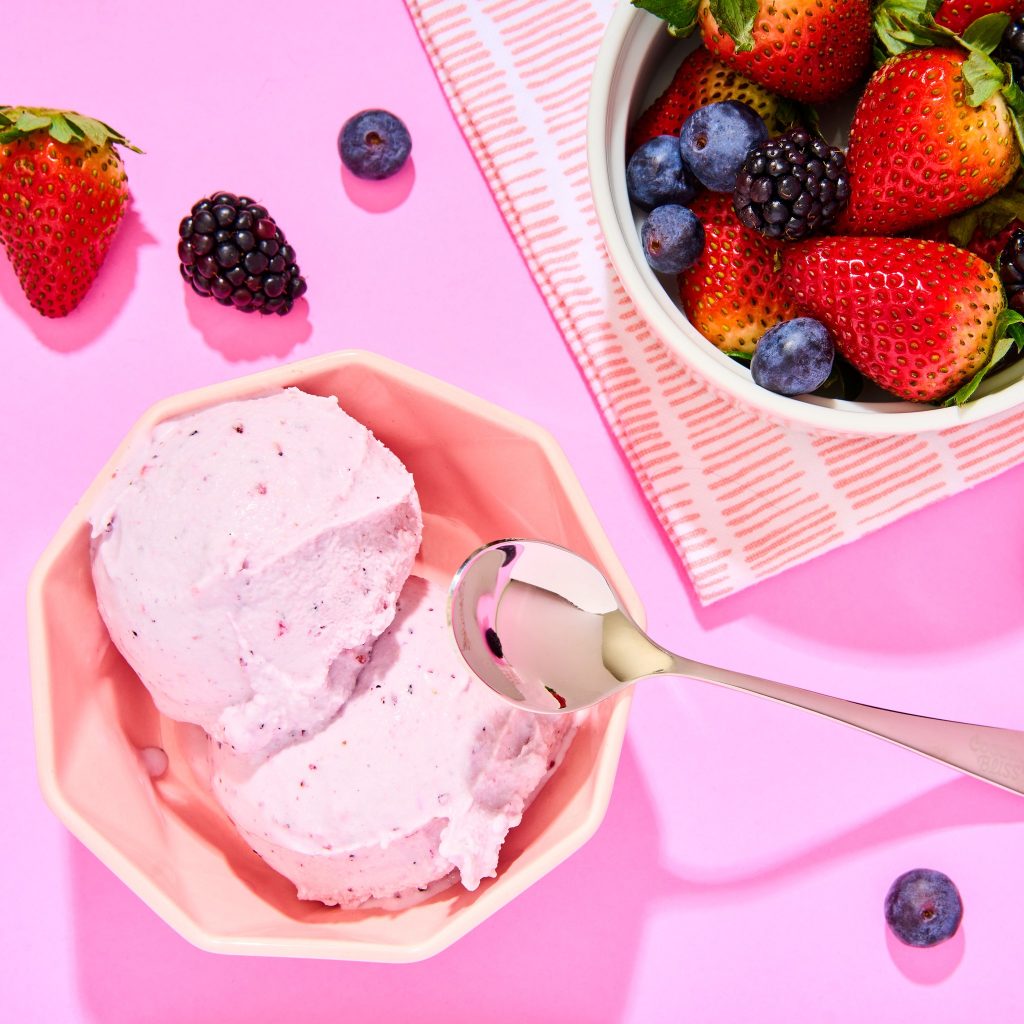 Find anything vegan near you via our handy online plant-based directory!